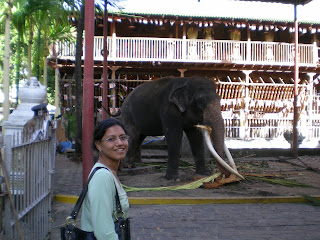 "What Mumbai is to India, Colombo is to Sri Lanka," the smile on the Sri Lanka Tourism Board (SLTB) official's face widened as we waited for him to give us some information about hotels in Colombo. Few Indian honeymooners would make an unplanned trip to Sri Lanka. Ours wasn't completely unplanned. We had indeed gone through hotels recommended by the Lonely Planet at a bookstore in Male. Our return flight was supposed to be via Colombo, so we thought of stopping over for a day.

Hotel bookings: Having reached at the dead of the night, we thought of enquiring about hotels in Colombo at the SLTB counter at the airport when a Colombo Hotels Corporation official materialised from nowhere. For two hours we haggled over the prices of hotels in downtown Colombo. We'd booked our rooms for $50 a night (SL Rs 111) at Hotel Goodwood near the airport but official suggested we board one in downtown Colombo so we looked at brochures for various hotels. Our final pick: Hotel Grand Oriental at York Street in the Fort area of Colombo for SL Rs 4,500 (Around INR 2,000) a night.

Call a cab: The airport is 32 km from Colombo so you have to either hire a taxi or take the airport bus to Colombo. At that odd hour, keeping security concerns in mind we opted for a taxi that would cost us SL Rs 2,200 (it can cost you up to SL Rs 2,800 if you ask for a hotel pick-up). Transport in Sri Lanka is quite expensive. A half-hour journey by rickshaw in Colombo may cost as much as SL Rs 500 so please bargain carefully before you board it.

Whogunnit! Barely had we gone a few kilometres south towards Colombo, our car was flagged and asked to stop. Next a man with a gun, tapped on my window and asked me to open the door. He then pointed a gun at me and asked me for my identity card. My heart started thumping as I fumbled for my passport. The taxi driver flashed his card and said that we're Indians. Thankfully, our soldier just let us pass and I heaved a sigh of relief without realising that we would be checked nearly six times in a day's course in Colombo.

Fort precinct: We were put up at the Grand Oriental Hotel opposite the Port Trust. The hotel building which resembles the Great Western Building in Mumbai. The Fort area of Colombo is a lot like D N Road in Mumbai with British styled buildings. York Street is the main business district, lined with banks. The twin towers of the World Trade Centre stand right in the centre of this area. The President's House is closeby as is the Tourist Police Office. As this is a high-security zone, movement into and out of this area is really restricted especially at night when the army erects barricades and conducts random searches on evening walkers.

Attractions: A trip down to the famed Gangaramaya Temple is a must. If the giant tusker in the temple compound doesn't impress you much the ten-feet-tall brass statues of Buddha inside the temple definitely will. Colombo is dotted with many Buddhist and Hindu temples, with architecture very similar to that found in Tamil Nadu. Besides places of religious worship, the other tourist spots are the Town Hall (a carbon copy of the Victoria Memorial in Kolkata), the Vihara Mahadevi Park that has a spice garden and the Art Gallery near it which showcases the works of some of the finest Sri Lankan Artists since the 1930s (you can also buy prints of their works here for a few thousand SL rupees). While the National Museum buzzes with foreign tourists, the Dutch Museum in the heart of Pettah (equivalent to the Crawford Market in Mumbai) traces the links between the Dutch and the Sinhalese Kings in Kandy and about the sapphire and spice trade between the two countries.

Colombo Calling appeared in print in Mumbai Mirror on February 25. Do check it out here

Posted by Innate Explorer at 4:55 PM