The Song of the Lord on Amazon Kindle

This is the first book from my own publishing label, Typeshype, which went live on Amazon.com this morning. I wanted to start a label that publishes and promotes e-books on India and those by Indian authors. I thought it would be fitting to launch the label with a book that is ingrained into Indian consciousness, the Bhagavad Gita. The Song of the Lord is an abridged, contemporary translation of the original Sanskrit text which is 700 verses long. Do read it and let me know your comments regarding the content, navigation, download time and pricing. 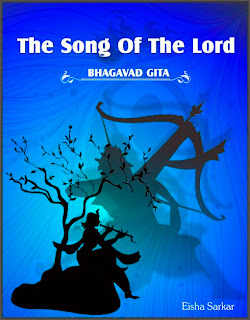 
On a dusty plain in Kurukshetra in northern India, stand two massive armies ready to fight the greatest war ever. As the kings of the world choose between the Pandavas and the Kauravas, the gods look down nervously from their heavenly abode. Arjuna, the third Pandava prince, asks his charioteer and dear friend, Krishna, to put his chariot between the two armies. He then sees his teacher, friends and relatives among the enemy ranks. Distraught, he asks Krishna, "What is the point of this war, where I will have to kill the people I love and respect?" He throws down his bow and arrows and declares, "I will not fight." Krishna tries to talk Arjuna out of his dilemma and in due course, reveals His true Self. It is this conversation on duty (karma) and religion (dharma) between the two great friends that will be retold again and again as the Bhagavad Gita.

The Song of the Lord is an abridged translation of this ancient Sanskrit text. It gives you an insight into the world that was and the lessons that you could take from it and implement in this day and age. Whether you read it as a story or a work of philosophy, The Song of the Lord, will ring in your head.
Posted by Innate Explorer at 10:55 AM

It's good to see this information in your post, i was looking the same but there was not any proper resource. I have also avail information about the best new project Umang Winter Hills

Eisha's translation of the Bhagavad Gita stays true to the original Sanskrit text. People not well-versed with Indian mythology will also find it an interesting read and the lessons at the end of each chapter helps one to interpret the teachings in the Gita in the modern context. Though the Gita ends before the actual episode of the 'Mahabharata war', Eisha has added a description of the war and its aftermath to give the reader a complete picture of the epic. A must read for all those believe in the doctrines of karma (duty) and dharma (faith).