Ahmad Shah Sayeedi, the director of the US-funded Lincoln Learning Center in Kandahar, Afghanistan, texted me with an unusual request: "Would you speak to the teens at the centre about Christmas through Skype?" I told him I would love to but since I could not be available on the allotted date for the interactive session, I could provide him with a video. He said that would be fine. I then asked him if there were any Christians in Afghanistan and whether the students had seen any Christmas celebrations. "Not likely," he replied. That posed a challenge for me. How do you explain to Muslim Afghan students what Christmas is about? I put forth the question to Asef, my Afghan student-friend in California, USA. His response was, "Christmas feast = Eid feast." This simple equation made it easier. I looked up the overlapping Biblical and Koranic references to Jesus's birth and the similarities between the Christian and Islamic festivals. I managed to put together a speech. If you'd like to hear me speak, please click here

The speech is below:

Merry Christmas to all of you in Kandahar!

My name is Eisha Sarkar and I am a writer, educator and designer based in India. I thank Ahmad for giving me this opportunity to share with you about Christmas.

First, I'll tell you the story about the birth of Jesus Christ or Isa as he's known in the Koran. Jesus was born in Bethlehem which is now in the West Bank in Palestine. When his parents Joseph and Mary arrived in the city from Nazareth in Israel, the inn or hotel had no room for them. They were offered the stable or manger, where Jesus was soon born. The angels saw that he was a divine child and told the shepherds the news of his birth. The shepherds spread it throughout the country. Three wise men followed the direction of a star and arrived to greet the baby with gifts of gold and incense. The star is known as the Star of Bethlehem.

This scene is described in a Christmas song. Christmas songs are called carols and they are sung in churches during the prayer services. I'll sing a few lines for you:

The cattle are lowing, the baby awakes
But little Lord Jesus no crying he makes
I love you, Lord Jesus; look down from the sky
And stay by my cradle until morning is nigh.

While Jesus's birth is celebrated on December 25th, many Christians start preparing for the celebrations 40 days before that. That period is called the Nativity Fast and is similar to the month of Ramazan. In the Eastern Orthodox Church in Greece, Turkey, Russia and eastern Europe, people fast by not eating red meat, poultry, eggs, dairy products, fish, oil and wine. In other churches like the Roman Catholic Church, the Protestant and Anglican churches, the fast is observed differently. Not all Christians fast. 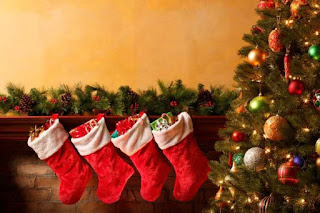 Christmas is a festival the family celebrates together. Christmas Day originally corresponded to the winter solstice or what is celebrated as Yalda in Iran and Afghanistan. The celebrations actually start with the Nativity Feast twelve days before December 25th. Like you have during Eid, there is a lot of shopping, gifting, cooking and feasting that happens during this festival. Christmas is celebrated not only by Christians but also by people of other communities all over the world. It's a public holiday in many countries, including India.

The next day, children wake up to gifts tucked under their pillows by Santa Claus. Santa Claus is a legendary figure in the West and is also called Saint Nicholas or Father Christmas. According to the story, he lives near the North Pole and brings gifts to people. He usually enters homes at night through chimneys, when everyone is asleep. He'll put the gifts in the stockings and socks children put up and under their pillows. It's usually a senior member of the family who plays the 'Santa' in a household. Santa Claus is always dressed in red.

Like Eid, the main focus of Christmas is eating and gifting. People forget each others' faults and celebrate together. In most of Europe and North America, people will chop off the top of a tree and bring it home to decorate with lights. It's called a Christmas Tree and they place gifts under it. In offices in India, there is a concept of secret Santa, where you buy a gift and write your name on it. Everyone in the office puts the gifts in a box and then everyone is allowed to pull out one gift for themselves. You may get a gift from someone you don't know. It's fun and encourages people to make new friends.

Christianity has been in India for about 2000 years and is celebrated in many different ways. In schools and colleges, there are Christmas parties where a teacher dresses up as Santa Claus and children sing, dance and eat. In the churches, the priests fast and pray till the Christmas Day feast. Cities are decorated with lights and bakeries make special cakes and delicacies. Everyone joins in the festivities, irrespective of their religion or race. The Christmas Day lunch is a big feast for the family. Traditional Christmas foods include roast meats, gingerbread, cakes, mousses, pies, wines and puddings. It's a lot like the feasts you have for Eid.

Christmas is a festival of love, friendship and bonding. It's about hope and light, of joyful giving.

I hope I have managed to convey a little about how Christmas is celebrated. I wish you all happy times and good luck for the New Year.

Posted by Innate Explorer at 6:31 PM

Very interesting blog. A lot of blogs I see these days don't really provide anything that attract others, but I'm most definitely interested in this one. Just thought that I would post and let you know.