My journey as a podcaster in Free Press Journal 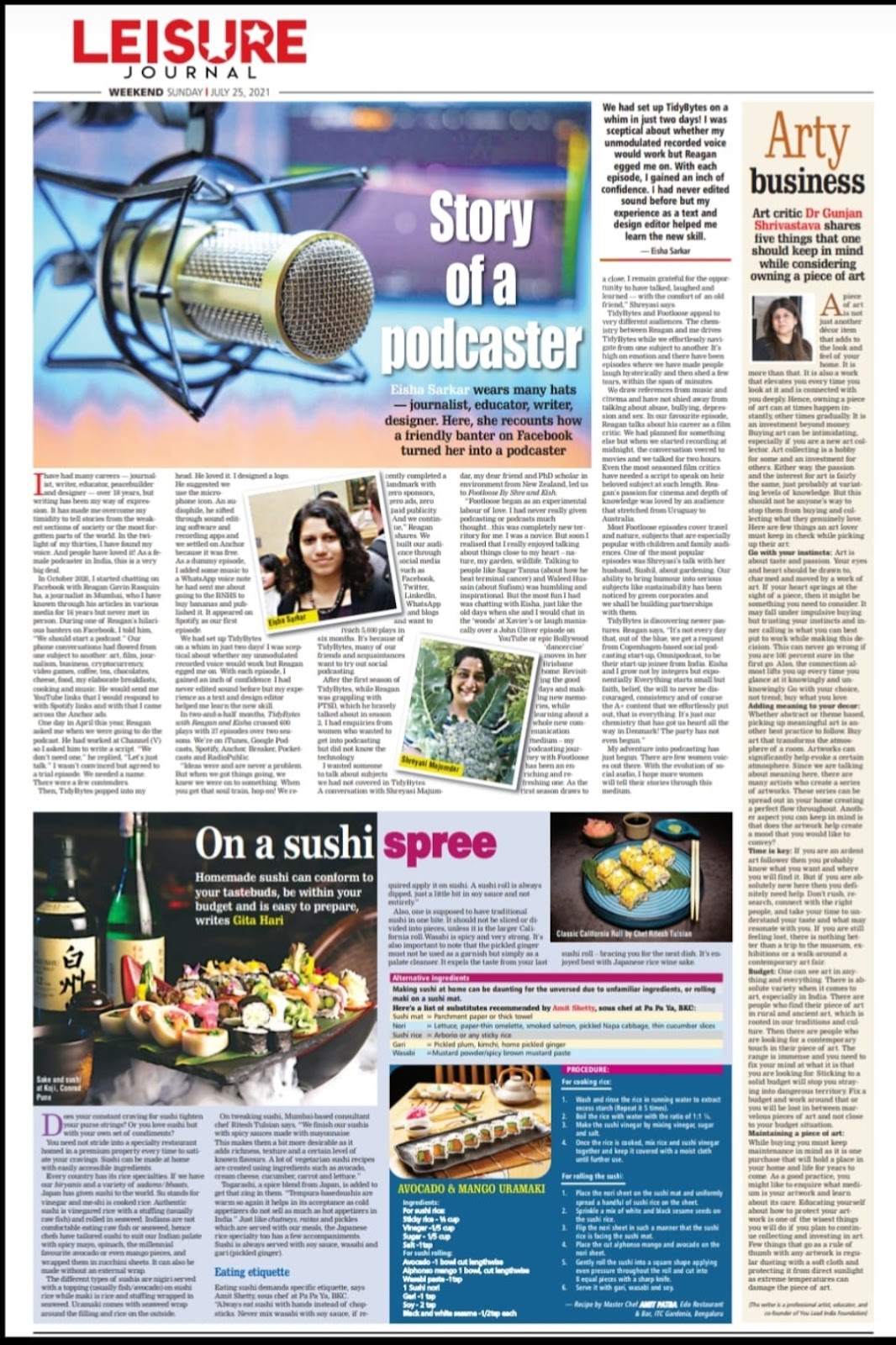 Story of a Podcaster

Eisha Sarkar wears many hats - journalist, educator, writer, designer. Here, she recounts how a friendly banter on Facebook turned her into a podcaster

I have had many careers; journalist, writer, educator, peacebuilder, and designer, over 18 years, but writing has been my way of expression. It has made me overcome my timidity to tell stories from the weakest sections of society or the most forgotten parts of the world. In the twilight of my thirties, I have found my voice. And people have loved it! As a female podcaster in India, this is a very big deal.

In October 2020, I started chatting on Facebook with Reagan Gavin Rasquinha, a journalist in Mumbai, who I have known through his articles in various media (including TOI) for 16 years but never met in person. Reagan’s hilarious and during one banter on Facebook, I told him, “We should start a podcast.” Our phone conversations had flowed from one subject to another: art, film, journalism, business, cryptocurrency, video games, coffee, tea, chocolates, cheese, food, my elaborate breakfasts, cooking and music. He would send me YouTube links that I would respond to with Spotify links and with that I came across the Anchor ads.

One day in April this year, Reagan asked me when we were going to do the podcast. He had worked at Channel [V] so I asked him to write a script. “We don’t need one,” he replied, “Let’s just talk.” I wasn’t convinced but agreed to a trial episode. We needed a name. There were a few contenders. Then, TidyBytes popped into my head. He loved it. I designed a logo. He suggested we use the microphone icon. An audiophile, he sifted through sound editing software and recording apps and we settled on Anchor because it was free. As a dummy episode, I added some music to a WhatsApp voice note he had sent me about going to the BNHS to buy bananas and published it. It appeared on Spotify, as our first episode. We had set up TidyBytes on a whim in just two days! I was sceptical about whether my unmodulated recorded voice would work but Reagan egged me on. With each episode, I gained an inch of confidence. I had never edited sound before but my experience as a text and design editor helped me learn the new skill.  In 2.5 months, TidyBytes with Reagan and Eisha crossed 600 plays with 37 episodes over two seasons. We’re on iTunes, Google Podcasts, Spotify, Anchor, Breaker, Pocketcasts and RadioPublic. “Ideas were and are never a problem. But when we got things going, we knew we were on to something. When you get that soul train, hop on! We recently completed a landmark with zero sponsors, zero ads, zero paid publicity. And we continue,” Reagan shares. We built our audience through social media like Facebook, Twitter, LinkedIn, WhatsApp and blogs and want to reach 5000 plays in six months. It’s because of TidyBytes, many of our friends and acquaintances want to try out social podcasting.

After the first season of TidyBytes, while Reagan was grappling with PTSD, which he bravely talked about in season 2, I had enquiries from women who wanted to get into podcasting but did not know the technology. I wanted someone to talk about subjects we had not covered in TidyBytes. A conversation with Shreyasi Majumdar, my dear friend and PhD scholar in environment from New Zealand, led us to Footloose By Shre and Eish.

“Footloose began as an experimental labour of love. I had never really given podcasting or podcasts much thought…this was completely new territory for me. I was a novice. But soon I realized that I really enjoyed talking about things close to my heart – nature, my garden, wildlife. Talking to people like Sagar Tanna, (about how he beat terminal cancer) and Waleed Hussain, (about sufism) was humbling and inspirational. But the most fun I had was chatting with Eisha, just like the old days when she and I would chat in the ‘woods’ at Xavier’s or laugh maniacally over a John Oliver episode on YouTube or epic Bollywood ‘dancercise’ moves in her Brisbane home. Revisiting the good days and making new memories, while learning about a whole new communication medium – my podcasting journey with Footloose has been an enriching and refreshing one. As the first season draws to a close, I remain grateful for the opportunity to have talked, laughed and learned – with the comfort of an old friend,” Shreyasi says.

TidyBytes and Footloose appeal to very different audiences. The chemistry between Reagan and me drives TidyBytes while we effortlessly navigate from one subject to another. It’s high on emotion and there have been episodes where we have made people laugh hysterically and then shed a few tears, within the span of minutes. We draw references from music and cinema and have not shied away from talking about abuse, bullying, depression and sex. In our favourite episode, Reagan talks about his career as a film critic. We had planned for something else but when we started recording at midnight, the conversation veered to movies and we talked for two hours. Even the most seasoned film critics have needed a script to speak on their beloved subject at such length. Reagan’s passion about cinema and depth of knowledge was loved by an audience that stretched from Uruguay to Australia.

Most Footloose episodes cover travel and nature, subjects that are especially popular with children and family audiences. One of the most popular episodes was Shreyasi’s talk with her husband, Sushil, about gardening. Our ability to bring humour into serious subjects like sustainability has been noticed by green corporates and we shall be building partnerships with them.

TidyBytes is discovering newer pastures. Reagan says, “It’s not everyday that, out of the blue, we get a request from Copenhagen-based social podcasting start-up, Omnipodcast, to be their start-up joinee from India. Eisha and I grow not by integers but exponentially. Everything starts small but faith, belief, the will to never be discouraged, consistency and of course the A+ content that we effortlessly put out, that is everything. It’s just our chemistry that has got us heard all the way in Denmark! The party has not even begun.”

My adventure into podcasting has just begun. There are few women voices out there. With the evolution of social audio, I hope more women will tell their stories through this medium.

Footloose By Shre and Eish