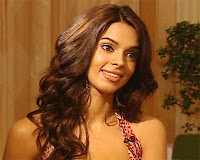 I first met Mallika Sherawat in 2003, when I was still a student of journalism. I remember her as this ultra-thin woman draped in a blue-pink saree on the sets of Murder at Nataraj Studios, JVPD Scheme. I vaguely recollected seeing her on screen with Tusshar Kapoor and Kareena Kapoor in the very forgettable Jeena Sirf Tere Liye. Mallika had then introduced herself as Reema Lamba, hastily adding, "But my screen name is Mallika Sherawat so if you are writing anything on the film, then please quote me as Mallika."

We didn't care. We wanted to meet Mr Mahesh Bhatt. We were more interested in Bhatt Productions' annual profits and its new ventures than a wannabe starlet. (We did spare a thought for Emraan Hashmi though!)

Little did I know that Reema aka Mallika would soon be dishing out some of the most quotable quotes that gossip columnists and film magazines would vouch for and even work in a Jackie Chan film.
Posted by Innate Explorer at 10:46 AM

What yaar Sarkar?? can't spot talent when it's staring at you in the face!!!