Of Berry Pulao and Raspberry Soda 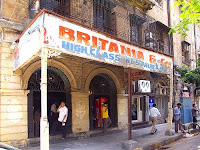 I must credit my friend Ashish (who is a girl, by the way) for introducing me to Britannia. No, she never took me there. But she did ask me to read an article on Parsi food joints she had written for Downtown Plus. I knew Merwan, Kayani, Yezdani, etc. But Britannia, didn't sound bawa enough. (Come to think of it...it's British and hence Anglican and...so Bawa but I never quite came up with that kind of explanation earlier). Ashish had described Bawa-ness of the Britannia restaurant at Ballard Estate (near New Customs House, if you please) and its speciality Berry Pulao. I never quite made sense of that. Pulao with berry? I alsways thought the owner has rechristened resins as "berry" to make it look like it was the only thing of its kind in Mumbai. I was sceptical - as I always am where food is concerned. 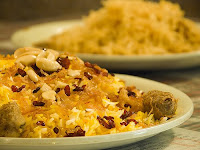 The first time, I actually visited the place was last year. I would have made a trip earlier but I was so scared of getting lost in the labrynthine bylanes of Ballard Estate that I just didn't have guts to try it out. Pardon me, folks. I hadn't developed my tastebuds for the sinful delicacy that actually draws people from as far as Surat and even Bawa expats who keep homing in during winter. The occasion presented itself in the form of a few junior colleagues who craved for berry pulao and sali boti. I had volunteered to participate in the conversation and it was very natural for me to actually take them up on the offer. We piled into three separate cabs - some 10 of us.

The first thing I noticed when I stood outside the very regular looking Irani restaurant was the signboard that proudly announced: "Britannia: The High Class Irani Restaurant." "Oh really! We shall see," was our collective response.

We managed to grab two tables with chequered green tablecloth (how Iranian) and settled ourselves into the 100-year-old black Czechoslovakian chairs (again!) as an old man came to our table. He introduced himself as the owner (pity, I don't recall his name) and talked to us about the restaurant - of how it was the secret headquarters for British spies during the World War II, of his pet rooster who welcomed guests until its ripe old age (it died a decade ago) and the food - "Try berry pulao - mutton, chicken or veg (that's the only veg item on the menu), whichever you please." And thank god we did.

From then on, Britannia's tangy berry pulao became one of my favourite delicacies. The berries are very real and slightly unreasonable (as per standard Irani rates) at Rs 249 a plate, you can have a comfortable meal for two with some delicious sali boti or sali chicken for company. As for the drink, I'd go for the very Bawa Roger's raspberry soda anyday. People may say it tastes like Benadryl cough syrup but it gives the tangy berry aftertaste a new flavour.

However, vegetarians may have a tough time as my colleague who is a Jain discovered on a visit. She had insisted she wanted to go to Britannia for lunch. I was reluctant. But she'd persisted. I had nothing to lose and I agreed to go along. Big mistake. My poor friend went twice through the menu before she zeroed in on the only two veg dishes there - veg berry pulao and veg dhansak. And to make matters worse - she said she wouldn't eat if I ordered non-veg. So yeah, I ordered a veg dhansak (a disgrace!) and veg berry pulao. Midway through the meal, my friend said she'd had enough of the pulao and opted for - you know what - bun maska (phew!) I had learnt my lesson - keep vegans off Bawa joints.

Posted by Innate Explorer at 10:30 PM