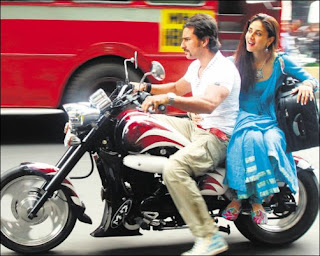 I just got a message on gtalk from my friend in the US. It reads, "I didn't know Kareena split with Shahid and is now seeing Saif." "What a pity," I thought but then I decided not to be mean to her so I simply responded with, "Old news." She wasn't happy with that. Whether she expected sympathy or probably more on the topic - when did the Shahid-Kareena break up happen, who got the dirt on it first, when did Saif declare his love for Kareena, the famed "Kareena' tattoo he got on his arm - I wasn't too sure. Nontheless, I empathised with my friend. She said, "This is what happens when you leave the country. You lose touch with your roots. You hardly get news about India in this part of the world unless there is a major disaster. And there's no gossip on Indian celebs."

I was a little shocked by her response. For one, I have known this girl since college. We weren't in the same group but we were very cordial classmates. She would sit on the first bench, I on the second (usually just behind her). I hadn't heard her discussing movies in class or in the girls common room at St Xavier's (where their gang used to hang out). She was studious...actually, still is. And was also my closest competitor in class. I wondered where she had acquired a taste for gossip. Probably when she studied in Baroda probably after she completed her MSc and was teaching at an NGO in Mumbai or maybe, I had been wrong all along - she may have had a thing for it all along.

Everybody loves a good gossip - even guys (as much as they want to deny the fact). If you just slip in a couple of lines laced with malice in the middle of a conversation at a party and everyone's ears prick up. Gossip is the best conversation-starter we have. Ask me, I was a Page 3 journalist.

My job was to go to high profile events, parties and dos to keep track of who says what to whom and why. When people would call Page 3 of Bombay Times 'trash' because of its gossip content, I'd retort, "But don't tell me you don't read that page." They would cringe or smile sheepishly. Once, at a party, a celeb artist saw me and remarked to her friend, "I don't know why so many art dos feature in Bombay Times. We aren't celebs. We don't seek this kind of publicity." My report for the next day, did carry her quote and my response to it as well (and I am very very grateful to the editor that he let it go as is) - "But, isn't any publicity good for you? And if it isn't why do you call us?" There would be times, when celebs would ask us journalists for gossip on other celebs (after all, we do know better). It's a vicious cycle.
Coming back to Saif-Kareena, it may be nobody's business to talk about them, but don't we all love to. As mediapersons, such gossip is the source of our daily bread and butter. But for my friend in the US who is doing a PhD in biomolecules in Boston, it's the only way she can connect to her roots. Yes, she has friends like me, but we can't contact each other whenever we want to thanks to the time-difference. She prefers to surf entertainment sites for gossip instead of 24x7 CNN coverage on the bomb-attacks in India. At least, the gossip makes her secure. The talk about 'others' is certainly more comforting than the thought of 'I could have been killed here."
My friend asked me, "Give me some new goss." I said, "I don't know." I lied, of course. There are million things I can gossip about - the Salman-SRK fight, Sania Mirza in track-pants at the Olympics' opening, sports, books and their authors (Rushdie comes to my mind now), cricketers, PYTs at parties, colleagues, friends-who-are-not-close-friends, politicians, economists, bosses, families, relatives - you name it. But then, the goss is a goss for a reason right? And it's got to be shared for a reason too. It certainly isn't free.
Posted by Innate Explorer at 7:49 PM