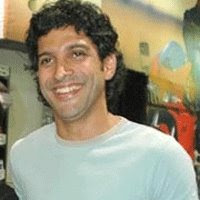 I must confess at the very outset that I like Farhan Akhtar. I think I watched Dil Chahta Hai because I had a crush on him - yes, the other three dudes in the film were cool too - but Farhan had a special place in my heart. It was for him and Shah Rukh Khan that I watched Don, though I never really liked the original. And it's for him, I watched Rock On. And once again, I wasn't disappointed.

Farhan simply stole the show with his constipated voice (much like Bryan Adams) that served as the medium to convey peppy lyrics (I can't believed Javed Akhtar dished that out himself) and his acting. Farhan's acting reminded me of Shah Rukh's in Swades. Farhan doesn't act. He simply reacts.

It's never over-the-top. In portions, he almost seems immune to what's happening around - but his eyes do the talking. They convey a hint of jealousy when Arjun Rampal writes the lyrics for a song. They twinkle with glee - at the sight of a lake - and they convey a deep-rooted sadness that can't be replaced even by acquiring the best things in life.

In an author-backed role, I must say Farhan has made a smashing acting debut and he's been man enough to produce a film like this himself. I hope other directors sit up and take notice too. And I think they should consider him for a lead in some projects.
Posted by Innate Explorer at 10:57 PM