Getting parents to be creative

Drawing, dancing and demonstration of the ECE kit were part of the celebrations of the Global Action Week for Education 2012 in Mankodi village in Kawant 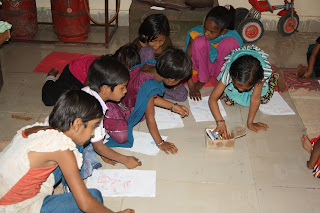 A group of children scramble on the floor of the anganwadi at Mankodi village for a new set of crayons. A boy picks up a red crayon and on a piece of chart paper, draws a boat with a flag, one that he must not have seen in this interior, underdeveloped region of Kawant in Vadodara district. It’s a busy day at the anganwadi. But in spite of the din around, he doesn’t look up till he has finished drawing. The other children around him lack that concentration. They keep looking out for their parents who have assembled to participate in the celebrations for the Global Action Week for Education 2012. This year's theme is Early Childhood Care and Education (ECCE) and the slogan is, “Rights from the start: Early Childhood Care and Education Now!”

While the anganwadi’s helper Ramilaben Rathwa tries hard to maintain decorum inside the center, Kapilaben Rathwa, the anganwadi worker, joins the 300-odd villagers who have gathered there to welcome the State ECCE Consultant, Dr Jigisha Shastri and the District Education and ECCE Consultant Dhruti Mankodi. The mood is that of a wedding's. Young girls perform Timli, the folk-dance of the Rathwa community. Kapilaben sings for the villagers and men sway to the beat of traditional drums. The music gradually fades away. Jayantibhai Vankar, Block and Cluster Coordinator of Baroda Citizens Council (BCC) (which is UNICEF's partner NGO in the area), tells the villagers about ECE and why pre-primary education is necessary. "If your children go to the anganwadi before they go to a primary school, they will be able to grow and develop better," he tells them. 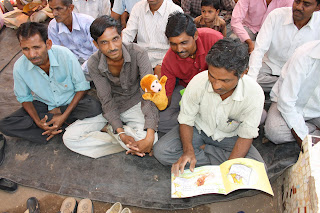 The villagers look on curiously as Dhruti Mankodi opens the UNICEF-sponsored ECE kit. She picks thepuppet of a parrot,gloves it and shows them how it can be used to narrate stories. Then she asks them to do the same. Since the villagers have never seen a hand puppet before, they shy away. Finally, one man takes the bait. He gloves it much to the amusement of his fellow audience members. Encouraged by the consultants and BCC members, he manipulates the puppet. Now, the rest of the men want puppets too."Look, if you have so much fun with them, imagine how much more fun it would be for your children. You must send your children to the anganwadi so that they can play with the puppets," Mankodi tells the villagers. They all nod in response. 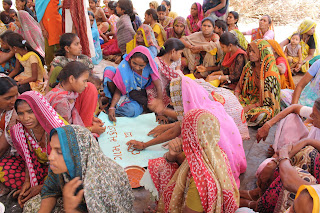 It’s time for the parents to dosome drawing as well. Boxes of crayons and sheets of chart paper are passed around. “How many of you have ever done any kind of drawing?”Devdoot Rajguru, a sculptor from Bhavnagar and a Fine Arts’ alumnus from M S University of Vadodara, asks the villagers. They shake their heads. "Here's your chance to do something that you don't do everyday. Draw, color, paint – do whatever you want," he urges them. The men start off gingerly while the women stare in silence. A man picks a blue crayon and starts drawing a parrot. Another dips his index finger into a vessel containing geru (red clay) and draws the picture of a bird. The women take the cue. One of them writes the name of the village in Gujarati with geru. The younger ones draw flowers with crayons. A group of teenage boys jointly create a scenery — hills, trees and jeeps.

“The villagers take great pride in participating in this parent meeting,” says the village’s sarpanch Ashokbhai Rathwa. “It’s different now. Parents come for meetings regularly,” says Kapilaben, who not-so-long ago had to persuade parents to send their children to the sarpanch’s house so that she could teach them something. Her 25 years as an anganwadi worker have been full of challenges. Yet, she has soldiered on. “It’s for the betterment of our children,” she says, adding that now at least 33 children come to the anganwadi regularly.

Steps towards a brighter future

The idea of getting the parents to do some activities as part of the celebrations is to sensitize them towards ECE in particular and education in general. Kawant is one of the most impoverished regions in the state. Repeated efforts by NGOs in the field of education have often been thwarted off by the strict orthodoxy of the Rathwa community that is native to this region. Since there are missionaries in the area, the members of the community have,for years, shunned education fearing religious conversion.

Over the past three years, members and volunteers of BCC from the block have slowly and consistently tried to persuade villagers to send their children to schools and 241 anganwadis there. And in April 2012, out of the 742 out-of-school children (children who have either never been enrolled into school or have dropped out of school), 120 were enrolled into some of the 218 primary schools in the block, notes Vankar. Getting members of the community to participate in the process of dissemination of education has meant that the girls also now have a chance to learn and grow. In Mankodi village itself, two teenaged girls have already started teaching six others who have never been schooled before. These small efforts will go a long way in developing the communities and the region.

Posted by Innate Explorer at 11:32 AM