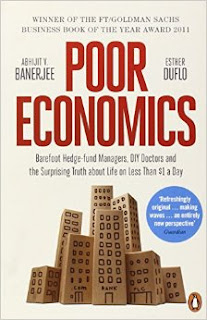 Abhijit Banerjee and Esther Duflo's Poor Economics: Rethinking Poverty and the Ways to End It gives a voice to those things you already know but choose to overlook while you're busy running your life. It makes you think about the millions of poor people all over the world, whose struggles make for great content material for election campaign speeches but seldom are tackled with the decisiveness they demand. In their bid to look for the answer to why poor people remain poor and what we (as the not-poor and better educated) do about them, both Banerjee and Duflo have traveled the world, conducted interviews with people of many races, castes and countries, understood the needs, ambitions, strengths, businesses and the problems of the impoverished and come up with some gems of wisdom that will make you rethink the way you look at poverty and the people it embraces. Sample these:

1. The practice of development policy, as well as, the accompanying debates, seems to be premised on the impossibility of relying on evidence: Verifiable evidence is a chimera, at best a distant fantasy, at worst a distraction.

2. For most of us in the West, poverty is almost synonymous with hunger... The association of poverty and hunger is institutionalized in the UN's Millenium Development Goal (MDG), which is "to reduce poverty and "hunger." Indeed, poverty lines in many countries were originally set to capture the notion of poverty based on hunger - the budget needed to buy a certain number of calories, plus some other indispensable purchases (such as housing). A "poor" person was essentially defined as someone without enough to eat.

3. When very poor people get a chance to spend a little bit on food, they don't put everything into getting more calories. Instead, they buy better-tasting more expensive calories.

4. Potatoes may have been responsible for 12 percent of the global increase in population between 1700 and 1900.

5. It is clear that things that make life less boring are a priority for the poor.

6. The social returns of directly investing in children and pregnant mother nutrition is tremendous.

7. Health certainly has the potential to be a source of a number of different traps. For example, workers living in an insalubrious environment may miss many workdays; children may be sick often and unable to do well in school; mothers who give birth there may have sickly babies. Each of these channels is potentially a mechanism for current misfortunes to turn into poverty. The good news is that if something like this is what is going on, we may only need one push, one generation that gets to grow up and work in a healthy environment, to set the trap loose.

8. Eradicating malaria indeed results in a reduction in long-term poverty.

9. The issue is therefore not how much the poor spend on health, but what the money is spent on, which is often expensive cures rather than cheap prevention.

10. There was also a clear pattern in errors: Doctors tended to underdiagnose and overmedicate.

11. Governments have a way of making easy things much less easy than they should be.

12. The poor in many countries seem to have the theory that it is important that medicine be delivered directly to the blood - this is why they want injectibles.

13. People seem to be willing to start the immunization process, even without any incentives. The problem is to get them to complete it.

15. The poor seem to be trapped by the same kinds of problems that afflict the rest of us - lack of information, weak beliefs and procrastination among them.

16. The primary goal of healthcare policy in poor countries should be to make it as easy as possible for the poor to obtain preventive care, while at the same time regulating the quality of treatment that people can get. An obvious place to start, given the high sensitivity to prices, is delivering preventive services for free or even rewarding households for getting them, and making getting them the natural default option when possible.

17. All over the Third World, little boys and girls who help their parents in their family stall or store do much more complicated calculations all the time, without the help of pen and paper. Are schools actually making them unlearn?

18. If the program was demonstrably a great success, the new government would not find it easy to get rid of it.

19. Given that the number of children born to each family goes down sharply with income, this means that education spending per child grows much faster than total consumption.

20. The peculiar way in which expectations about what education is supposed to deliver distort what parents demand, what both public and private schools deliver, and what children achiece - and the colossal waste that ensues.

21. They (the poor) see education as a lottery ticket, not as a safe investment.

22. The lower-caste teachers were more likely to assign worse grades to lower-caste students. They must have been convinced these children could not do well.

23. English-language instruction is particularly popular with parents in South Asia, but non-English-speaking parents cannot know whether the teachers can actually teach in English.

24. Among all those people who drop out somewhere between primary school and college and those who never start school, many, perhaps most, are victims of some misjudgment somewhere: Parents who give up too soon, teachers who never tried to teach them, the students' own diffidence.

25. A combination of unrealistic goals, unecessarily pessimistic expectations, and the wrong incentives for teachers contributes to ensure that education systems in developing countries fail their two basic tasks: giving everyone a sound basic set of skills, and identifying talent.

26. What is particularly good about the computer as a learning tool: Each child is able to set his or her own pace through the program.

27. Recognizing that schools have to serve the students they do have, rather than the ones they perhaps would like to have, may be the first step to having a school system that gives a chance to every child.

28. A striking feature of HIV is that women from the ages of 15 to 19 are five times more likely to be infected than young men in the same cohort. This seems to be because young women have sex with older men, who have comparably high infection rates.

29. In surveys on desired family size in which men and women are separately interviewed, men usually report a larger ideal family size and consistently a lower demand for contraception than their wives.

30. Fertility is in part a social and a religious norm, and deviation sfrom it do get punished (by ostracism, ridicule or religious sanctions). Therefore, it matters what the community deems to be appropriate behaviour.

31. Families not only choose an optimal number of children, they also choose the gender composition.

32. In India, girl babies stop getting breast-fed earlier than boys which means that they start drinking water earlier and have accelerated exposure to waterborne life-threatening diseases like diarrhoea.

33. The mortality differential between boys and girls decreases when a girl's marriage prospects are brighter.

34. Economists often ignore the inconvenient fact that the family is not the same as just one person.

35. A natural reaction when faced with a drop in wages or earnings is to try to work more. But this may sometimes be self-defeating. If all the poor labourers want to work more when times are bad... they compete with each other, which drives the wages down.

36. Farming households in India use marriage as a way to diversify the "risk portfolio" of their extended families.

37. A study in India showed that farmers put in 20 per cent less of their effort on land that they sharecrop compared to land where they are entitled to the entire crop. As a result, these plots are farmed less intensively and less efficiently.

38. Why is it cheaper to lend to richer people?

39. Saving is less attractive for the poor because for them the goal tends to be very far away and they know that there will be lots of temptations along the way. But of course, if they do not save, they remain poor.

40. It is possible that people who don't envision substantial improvements in their future quality of life opt to stop trying and therefore end up staying where they are.

41. A steady and predictable income makes it possible to commit to future expenditure and also makes it cheaper to borrow now.

43. Former colonies where the disease environment prevented large-scale settlements by Europeans tended to have worse institutions during colonial times (because they were naturally picked for being exploited from afar), and these bad institutions continued afer decolonization.

44. A study of the allocation of driver's licenses in Delhi showed that knowing how to drive did not really make it more likely that someone would actually get a driver's license but being willing to pay more to get it fast. Delhi effectively has a free market in driver's licenses and that's exactly what we do not want.

45. The police in India represent a near-perfect example of a persistent colonial institution.

46. The new ideology in a lot of international institutions is that we should hand the beneficiaries the responsibility for making sure that schools, clinics and local roads work well. This is usually done without asking the poor whether they really want to take on this responsibility.

47. Politics is not very different from policy: It can (and must) be improved at the margin, and seemingly minor interventions can make a significant difference.

48. The "three Is" problem: ideology, ignorance, inertia. This problem plagues many efforts to supposedly help the poor.

49. Many people in positions of power have mixed motives - they want to be loved or do good, both because they care and because it secures their position, even when they are corrupt. These individuals will do things to promote change, as long as they are not entirely inconsistent with their economic objectives.

50. There is no reason to tolerate the waste of lives and talent that poverty brings with it.

51. The poor bear responsibility for too many aspects of their lives. The richer you are, the more the "right" decisions are made for you.

52. Changing expectations is not easy, but it is not impossible.

53. The role of expectations means that success often feeds on itself. When a situation starts to improve, the improvement itself affects beliefs and behaviour.


Posted by Innate Explorer at 9:39 PM