As a part of a peace initiative, I've been introduced to some very dynamic people from across South Asia. One such person is Salma Noureen from Charsadda in Khyber-Pakhtunkhwa, Pakistan. Salma and I share our love for Chemistry, music, languages, literature, food, education and travel. She calls me "octopus" (because of my multi-faceted personality and not my hair, she says) and I call her "my gypsy girl". We both have a sense of humour and our conversations are filled more with giggles than words. This series, Conversations with Salma, captures the essence of our chats.

Me: Have you heard of Chetan Bhagat?
Salma: Yes. I bought his book and then my Indian friend told me not to read it.
Me: Read it. Mr Bhagat can be entertaining.
Salma: Really? My friend was so against the idea.
Me: He's India's bestselling author, not the best author. But when a man makes tons of money writing trash, I do want to read it.
Salma: You're brutally practical
Me: (thinking) Thank heavens she didn't say, "You're practically a brute." (No offence meant to my four-legged friends).

Salma: I want to see you. I want to know what you look like.
Me: Hum insaan ke tarah hi dikhte hain (I look like a human being.)
Salma: But I want to know whether your hair is curly or straight.
Me: It sometimes looks like a telephone cord and sometimes like noodles
Salma: So your hair's curly!
Me: Yes
Salma: Not many people have curly hair. It's rare. You're rare. 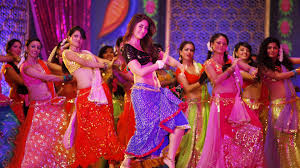 Salma: Bollywood films are so nonsensical. My impression of India was because of Bollywood. Thankfully, it has changed after I met some of you. I wonder why they make films like that. No story. Nothing is real.
Me: In India, cinema is sometimes the only form of entertainment a poor man can afford. The makers of films have always taken that into account. You may wonder why we make movies with four songs, three action sequences and a love story woven in. That's because it gives the chance to a viewer, no matter how poor he is, to escape into a world of make-belief for three hours. That said, Bollywood isn't the only cinema India makes. We make over 834 movies a year. Only a percentage of that is Bollywood. We have a lot of very sensible cinema as well in many languages.
Salma: I don't think anyone has ever explained this to me so nicely.
Me: (grinning)

***
Salma: All my Indian friends are vegetarian. I was surprised when I saw your Facebook updates about mutton and chicken. My Indian friends can't even mention eggs at home.
Me: Some Indians don't eat eggs. Some Indians eat anything that moves. I belong to the latter.
Salma: Awesome! We should have dinner together.

Posted by Innate Explorer at 11:21 AM