"Why would you go to a museum alone?"
"Why do you want to go to a museum if you aren't going to do a story for the paper? It will be a waste of time."
"There's a museum in Byculla? Where? When did it come up?" 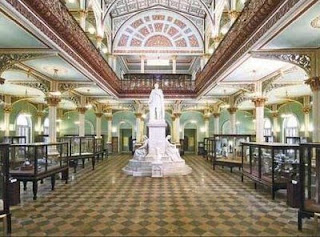 I knew I had made a mistake by telling people that after waiting for two years (when it was closed down for renovation), I would finally be able to check out the Bhau Daji Lad Museum at the Byculla zoo. I am a museum junkie. I’ve been to all the museums in Mumbai – BEST Museum at Wadala, Chhatrapati Shivaji Sangrahalaya at Kala Ghoda, F D Alpaiwala Museum aka Parsi museum at Khareghat Colony at Hughes Road and even the RBI coin museum. Though I did not really expect people to know that it's the oldest museum in Mumbai (it's much older than the well-known Chhatrapati Shivaji Sangrahalaya formerly known as The Prince of Wales Museum at Kala Ghoda), I thought people would understand why I was so eager to go there.
The 150-year-old Bhau Daji Lad Museum, formerly known as The Victoria and Albert Museum holds the key to Mumbai's cultural heritage and showcases the city's development into India's commercial capital. But that's not what I wanted to see.

I just wanted to walk along the length of the length of the main display hall admiring the drawings on the ceiling, which I think is the second most beautiful roof in Mumbai after the magnificent dome of the Chhatrapati Shivaji Terminus. The shapes are geometric and follow a pattern. But the interplay of blue, gold, red and white is simply enchanting. The six-point blue star is similar to the one at the Magen David Synagogue nearby. It's unmistakingly Jewish. As you follow the trail of stars, walking along the floor, you reach the bust of Sir David Sassoon, Bombay's most prominent Jewish businessman in the 1880s. In fact, the marble bust of Queen Victoria and Prince Albert's statues were donated to the museum by Sassoon himself.

The outer structure of the museum built in art-deco style with palladian columns and wooden blinds on windows, resembles the Cotton Exchange building at Cotton Green. In fact, it's the same shade of green. That quite explains why it's devoted mainly to the trade and culture of the city.

I found Ming vases from China, Japanese tea sets, ivory paintings from England and shellwork from the Far East (there’s a beautiful carving of Vishnu on a Nautilus shell) that were imported to Mumbai by the rich. The museum displays Indian pottery, Bidri work, metalwork and even tea sets made of coconut shells that were very much in demand in Europe. Then there are oil paintings of Bhau Daji Lad, Jamshedjee Jeejeebhoy and the museums trustees and architects interspersed that adorn the walls along the broad central staircase. There are also Persian rugs that are put up along the sides of the staircase.

Upstairs, there are model depictions of life of the people of Bombay – of rural life, of business communities such as Baniyas and Parsis, forms of recreation such as the dandiya dance, traditional games for men and women and even the uniforms of various bearers. I found INTACH (the organisation that took charge of the museum’s renovation) head Tasneem Mehta explaining to a group of foreigners that the different uniforms for syces and bearers determined their rank and grade in the hierarchy. Besides models, there are old maps of Mumbai dating back to the 1770s when the Dungaree Fort (Dongri) still existed.

Just outside the museum are the marble statues of Queen Victoria with a nose broken (the statue was earlier at Victoria Terminus station aka CST), Lord Montague and headless statues of a couple of former governors of Mumbai. There is an iron spire that once stood at Esplanade. There is also a plaque that bears the date of the inauguration in 1776 of the Cowasji Patel Tank in Girgaum (there’s no tank now but the area is still known as C P Tank). And of course, there is the original ‘Kala Ghoda’ statue of Prince Edward on his horse in black stone that once stood outside the Elphinstone College.

The museum stresses on conservation. It was in a very bad state, till the Jamnalal Bajaj Trust and INTACH took over. There’s a corner where there are pictures of how badly damaged the aretefacts were before conservation and the procedures used to conserve them. Unfortunately, as visitors to such places of historical significance, we don’t really understand the significance of preservation.

Bhau Daji Lad Museum
At Ranibaug, Byculla
Timings: 11am to 5 pmThe zoo’s closed on Wednesdays, don’t know about the museum
Entry: Rs 10 for adults…it’s seriously worth the money
Posted by Innate Explorer at 12:12 PM

I LOVED YOUR MUSEUM!!!

It was a very beautiful museum!!!!!

When I was 10 yrs old(now I am 63),
I had repeatedly seen this museum.Now it has a very attractive look.Many unique statues,antique lamps,small models of couples from all the communities of MUMBAI,model of the Parsi Tower of Silence (where the last rituals of Parsis take place),clay models of Indian Sports are some of its unique features.