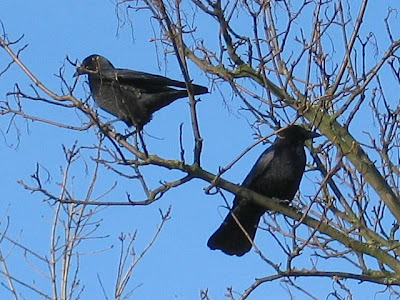 There are two kinds of birds in Dadar - crows and pigeons. If other species exist, they don't make themselves visible. And out of these two major families, I think crows outnumber pigeons.

It's the nesting season for crows. Unlike pigeons, they don't like building their nests in the crevices of buildings. Crows are larger birds. They like things big. They want more comfortable homes for their little ones. A tree-nest is perfect. But you don't find trees in Dadar (W) and if you do, you aren't too sure if it will survive if the BMC decides to widen the road.

A crow has been trying to build its nest on the ledge outside my bedroom. The ledge is meant to be for an airconditioner which we don't have. So the unoccupied ledge has become a prime spot for the crow to build its nest. Birds, like humans, are very picky about choosing their homes. It doesn't happen overnight (no, not even with pigeons). They conduct various recce missions to see if the place they pick on is safe from other predatory animals and humans. They take into account whether they will be able to balance the nest on the tree, pole, wall or ledge. Accordingly, they choose the materials for construction of the nest. Each bird-nest has a distinct feature that is a characteristic of the species. But birds in cities have got urbanised and you find metal pieces, wires and even chains that hold our nest together. The recces are very important and if the birds sense any danger, the place is immediately scrapped off the list.

What the crow didn't see during his recce is my mom. It assumed that the place was safe. It started dumping twigs onto the ledge. For five days in succession, Mom threw the twigs away. In defiance, the crow would get larger twigs and more material. Mom gave up after some time. The crow wasn't going to give in easily.

Mom changed her strategy. She would stick her face to the window above the ledge as soon as the crows would perch. She would gently tap the window a few times. That was enough to rattle the male crow who would loudly cry out 'Caw caw caw caw...' He would then ruffle his feathers, pump up its chest and try to scare my mom away. Mom wasn't going to budge. She enjoyed it thoroughly. The crows flew away.

I told her to leave the crows alone. She replied, "I want to protect you." I was amused. I told her, "Birds don't fear me. Crows don't cry out when they see me."

I moved to the living room window which has a box grille. I saw two crows tugging at the coir of a coconut at the base of teh grille. The crows saw me but didn't budge. I observed them (I love observing birds) tearing shreds off the coconut fibre and then flying away into the distance.

Suddenly, mom appeared from nowhere and she shooed the crows away. She took the coconut away. I said, "There was no need to take the coconut away. They weren't going to eat it." Mom said, "They won't. But how dare they use coir from this coconut to build their nest on my ledge? This is too much." Egos, I tell you.

Posted by Innate Explorer at 11:08 AM

Sachhi!
Had a different experience here though. On weekends, when me and mum sit on the our balcony, eating fruits, I've seen her feeding the crows. We used to leave rice for them in the mornings to eat. The crows know us now.
Oh, and by the way, a group of pigeons have settled in our other balcony. I like them. Irritated with their mating sounds, though, mum ends of humming, "Kabootar ja ja ja.." sometimes.. :)