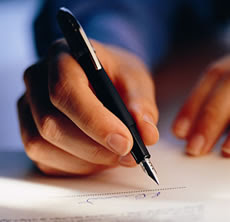 My colleague, Vishwas Heathcliff (Heathcliff has been borrowed from the vindictive character in Wuthering Heights because Vishwas doesn’t use his last name), runs a column in Mumbai Mirror’s Sunday edition. Vishwas is a graphologist and takes the science very seriously. It started as a hobby when he was working with The Telegraph in Kolkata. It then turned into a bit of a passion for him. His ‘pen-killers’ are supposed to have provided relief to many. So it was only natural for me to ask him to analyse my handwriting.

I didn’t want him to help me. I didn’t think a change in handwriting would change my life. I was just curious. I actually challenged him to make me cry during the session (a colleague of mine had broken down during one of his sessions).

My first attempt – a four-liner on a ruled sheet of paper – was trashed by Vishwas. He said, “I need atleast five pages on blank A-4 sheets. It’s difficult to analyse handwriting on a ruled sheet. You need to write at a stretch.”

Next attempt: I picked up a few sheets made of handmade paper and a ball-point pen. “What should I write on?” I decided to play safe (I didn’t know Vishwas well) and decided to fill up four and a half pages with what I thought of graphology. I wrote at a stretch. I always do.

I handed over the sample to Vishwas. He sighed and put it in his drawer that contained lots of envelopes (letters from readers and fans, perhaps!)

I had to wait for nearly 10 days. He asked me to meet him at a Barista (“I can’t rush with this. We’ll have a chat over coffee,” he said.)

We settled down and he started, almost immediately. He went through my g’s and t’s. We talked about stress, relationships, uncertainties, my past, my future, my nature, ambition, intensity, intelligence and of course, my famed photographic memory (it had made me popular in college).

However, the analysis didn’t tell me anything I didn’t already know. No skeletons in my cupboard? How could I have no secrets? I was slightly disappointed. Vishwas tried to brighten me up saying, “You are very expressive. You don’t have skeletons. That’s good.”

He ordered a cold coffee with ice-cream (that’s a staple during his sessions and the ‘client’ pays the bill.) “That’s not my fee,” he told me. I let that pass. Later, I told him that he hadn’t said anything I didn’t know. He replied, “I wasn’t looking into a crystal ball and looking into your future. I just analysed your handwriting to help you make your life better. I don’t know you that well. Give me some credit for getting my facts right.”

Then came the exercises. “Cross the t’s right on top as I have shown you,” he told me.

Later, during an online conversation, I asked him, "Scientifically speaking, even if my life were to improve, it wouldn't be just because of the change in my handwriting, right? Vishwas shot back, "Nobody is seeking credit from you. At least I am not. Finish the exercise and see the difference. After that you decide you want to give the credit to botany, microbiology or to your mamma!"

I was doing the exercise at home when my mom caught me. She freaked out. She’s a primary school teacher and her job is to teach kids how to dot their i’s and cross their t’s. “It took me four years to teach you how to write the alphabet. How dare a graphologist change the shape of the t? We follow the standard Marion Richardson script.”

One of Vishwas's columns will be about people like my mom. I'm waiting for it.
Posted by Innate Explorer at 11:22 AM

wow....i had heard of enough handwriting analysis but never realized changing it would change u

I just love how you write. Reading your blog for me is like sitting down and having a conversation with you. You always make me smile and you have a way with words.

Just thought I'd tell you in case you didn't know. :-)