I simply loved Cameron Crowe's Jerry Maguire. And more than anything else (even th bungling Tom Cruise), I liked the mission statement. So here it is for all those sports freaks, journalists and Jerry Maguire fans:
The things we think and do not say: Thoughts of a sports attorney 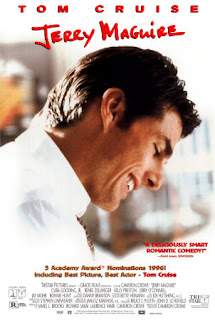 Miami Hilton, 1 AM
It's 1 AM and this might be the bad pizza I had earlier talking, but I believe I have something to say. Or rather, I have something to say that I believe in. My father once said, "Get the bad news over with first. You be the one to say the tough stuff." Well, here goes. There is a cruel wind blowing through our business. We all feel it, and if we don't, perhaps we've forgotten how to feel. But here is the truth. We are less ourselves than we were when we started this organization.
Sports Management International began as a small company. I was hired by Jack Scully in 1981, I was fresh out of college, I didn't even watch much sports. But a young man came to me, and his name was Bill Apodaca. He asked me to look at a contract he'd acquired to play football for the Atlanta Falcons. Before long I was overseeing the business of another member of the Falcons, and two baseball players. The nuances and the small miracles of professional sports would soon hook me - there was something simple and perfect about the way a stadium felt. The way you felt when a player you'd helped and represented made his stand in front of 54,000 people. And I remember the conversation Mr. Scully and I had by an elevator, standing next to one of those sand-filled ashtray posts, right before he hired me as one of the first agents in this company. "You and I are blessed, he said, "we do something that we love."
Tonight, I find those words guiding me back to an important place, and an important truth. I care very much about the fact that I have learned to care less. Now our company is one of the top three in this business, and we represent over a thousand athletes. Over sixty agents work at our huge new office, and I still haven't met all of you. The business of sports has never been bigger, or tougher, or more written about. And we are at the forefront. But I wonder tonight, as we leave our 13th annual conference ... we've talked a lot and partied a lot over the last three days, but I dare say that not one of us, our diet Pepsis and sheaf of papers in hand, have said what we really think.
It is beyond the easy arguments waged against sports, and our business on the editorial pages of the New York Times. It is beyond the huge salaries, the endorsements all our clients now want because "I'm a better actor than Michael Jordan." Beyond the globalization and merchandization of the games. It's more subtle than the baseball strike, more about loyalty than the Colts moving to Indiana, the Rams going to St. Louis, or the Cleveland Browns moving to ... someplace. I'm talking about something they don't write about. I'm talking about something we don't talk about.
We are losing our battle with all that is personal and real about our business. Every day I can look at a list of phone calls only partially returned. Driving home, I think of what was not accomplished, instead of what was accomplished. The gnawing feeling continues. That families are sitting waiting for a call from us, waiting to hear the word on a contract, or a General

I'm onto something here. And, as I said earlier, if you're reading this, it means that I didn't conquer this statement with my own fears of rejection. If if you knew me, and many of you do, you know that "rejection" and "fear" are not words I say easily. But this is more than a Mission Statement. This is not the equivalent of one of those magnetic "poetry kits," you know the ones you buy at a stationery store, a mess of words so you can assemble funny poems on your refrigerator door. This is from my heart. This is a love letter to a business I truly love.
Miami, 2:37 AM, Thoughts:
* * *
Coffee tastes different at night. It tastes like college.
* * *
I'm back. just checked the messages at home, and sure enough one of them was a man I will call Client X. Client X was watching ESPN and he saw Athlete Y talking about the many many millions he has in contracts both in football, baseball and product representation. We have all been on the receiving end of a message like the one I just picked up on my answering machine.
"Why aren't I making what Athlete Y makes," said my client. And the truth is obvious to everyone but Client X.
Athlete Y is a superstar, and is more talented. But to tell this to Client X would be asking him to become Ex-Client X. And so begins the game of flattery, of lip service, of doing everything possible to soothe and stroke. It is part of our lives, and part of our jobs. The game of agenting.