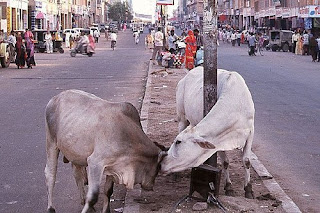 For a city of its size, Baroda aka Vadodara has a very large floating population of cows, as I discovered on my trip to the city, last week. Cows are omnipresent - along the city's roads, lined up along the dividers on the streets and in groups of ten in the tenement areas (you can't call them slums or jhopadpattis) and grazing on the greens. Then there are herds of buffaloes that jostle with modern contraptions such as green-and-yellow autorickshaws that run on compressed natural gas (CNG), Yamahas and Honda Civics. In fact, there are more cows on the streets than there are stray dogs and that makes Baroda curiously 'different' from any other Indian city.

The cattle, I gather comes from the neighbouring 'semi-rural' areas. Herdsmen have been traditionally coming into the city during the monsoon to look for small-time jobs to supplement their incomes. (These jobs have now become the primary source of income during the rains over the last few years as flooding has become a prevalent phenomenon in the low-lying plains around Baroda.) But unlike migrants in other Indian cities who leave their belongings and cattle in their villages, these semi-nomadic herdsmen, prefer to bring their highly-productive cows (and some bulls) into the city. They mark their cattle with stamps or rings (in the cows'nostrils) and leave cows to graze on the greens around the city (even the patches on the road dividers aren't spared). Thankfully, Baroda doesn't have too many open garbage dumps so the cows keep away from plastic junk that can fatally clog their intestines.

At night, the herdsmen, return after their daily-wage jobs, to gather their cows together. If you drive through the city late at night, you see the cows tethered together outside tiny semi-permanent shelters along the city's periphery. Older cows, who can no longer produce milk, are left astray. There are very few slaughterhouses in Baroda and even I am not sure if those that exist slaughter cows in post-Godhra Gujarat.

I find it quite amazing that even in India's most industrial and developed state, there lies a confluence between two entirely different forms of lifestyle - the nomadic and the urban.The move from a semi-nomadic lifestyle to a sheltered urban life may be tempting, but people still prefer to cling to their old way of life, much like the inhabitants of Mumbai's slums.
Posted by Innate Explorer at 11:24 AM

Do you by any chance wear glasses? I think you must have forgotten to take it to Baroda. By the way, Baroda district has a lot of villages. You must have visited one of them. Next time don't forget your specks.