Beauty and the geek 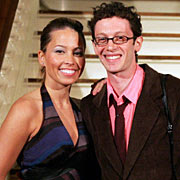 Yesterday, I happened to catch the last episode of Beauty And The Geek on Star World. A thing of beauty is joy forever, but what about the geek? I loved the show. It showcased the fears and insecurities that two competely different sets of people face. It paired cocktail waitresses and other pretty-young-things (PYTs for short) with academically brilliant men who believe quantum physics is easier than asking a woman out on a date.

Too bad I didn't catch up with the show from the start. It would have given me a better idea of how much transformation each contestant underwent till the end of the show. Still, from the few episodes I watched, I had a favourite. It came in the form of Josh. Josh is a museum critic. With his cute hairdo (he changed it from the 1960s Dylan style to a more contemporary boyish cut in the show), geeky glasses and nervousness, I took to him almost instantly. I just loved the way he fumbled with words while asking people out. I loved the way he would clutch onto his shoulder bag while walking. If I had known Josh, he would have been my best friend.

That's the point of the show. People like Josh are ideal best friend material. Girls seldom look at them as lovers. I am no nimble-brained beauty. I am a geek too. And speaking from experience, I've had loads of male pals who would count me as their best gal pal but never fall for me. Why? Maybe because I was too intelligent to handle. Yes, intelligence is a casualty in many ways.

Most ordinary people perceive geeks very differently. They don't really believe that scientists or researchers are a part of their world. Worse, they don't believe they could there too. I was chatting with a friend recently and something he said made me remark, "I have never heard someone reason like that. You should have been a scientist." My friend thought I was joking. He laughed nervously. I repeated it. He said coldly, "I was a pathetic student. I don't think no one would have ever thought of me becoming a scientist." Like many others, my friend also believed that science was a field very different from his own. He wasn't fit enough to be a scientist. Blame it on our education system. I've come across many high-scorers who claim to be scientists but lack any of the analytical skills required for science. They drop out as soon as they acknowledge that. There are others who are fantastic with practicals. But again, just a good pair of hands make for great laboratory technicians - not scientists.

People perceive geeks to be more than just ordinary. Many even get laughed at and ridiculed. Why? Because they can't chat up women in a library, of course! A few years back, my boyfriend, a software engineer, actually asked me whether it was okay with me that he had glasses. I responded, "I have glasses too. So what?" He simply said, "I just wanted you to know. I look like a geek in them." Thankfully, I wasn't myopic. And I was a geek, so it didn't really stop me from going out with another one.
Coming back to the show. It shattered many myths about beauties and geeks. Yes, geeks are insecure, but beautiful people are more insecure. The reason, unlike the geeks, they need to hide their insecurities. One of the beauties on the show had remarked, "I finally know what the guys go through when they go out. They should do away with the word geek. Let's just treat them as people for a change." I agree.
Posted by Innate Explorer at 2:15 PM

Email ThisBlogThis!Share to TwitterShare to FacebookShare to Pinterest
Labels: beauty and the geek, PYTs, scientist, show