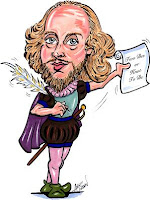 Not all of us have had the chance to read the great bard's plays but I have been forturnate to have read some of them. Yesterday, my friend and I had a lengthy discussion on the choices of caskets made by Portia's three suitors in The Merchant of Venice. While one chose the gold and another, the lead, the 'hero' Bassanio chose the lead. He didn't go for the appearance nce, he went for the 'strength of character'. Most people rarely move beyond appearances and first impressions.I recently, watched an episode of Indian Idol on television. A shy, 5ft 2 in boy came in for the audition. He was so shy that he simply whispered his name and that he had come down from Varanasi. His appearance did nothing for him, he said in front of an international television audience. Then her sang. The judges were stunned. So was I. He had a powerful voice. The judges asked him to sing something else. In the middle of this song, the boy coughed. Damn! He lost his rythm. He was confused and scared. He just did not know what to do. Anu Malik graciously sang the first two lines of the song. The boy picked up and breezed through the song. Wow! The judges gave him the nod. The boy couldn't believe it. He had crossed the first hurdle. I was glad. The judges had chosen the right casket.
Posted by Innate Explorer at 2:20 PM

Eisha, you have drawn an exquisite comparison between a section of the magnum opus and the reality show. It's indeed rare to see the right candidate win in such shows as most opinions are formed on the basis of where you come from, how you look and how politically correct you are. Well, as audience, we too sometimes choose the wrong casket and consequently lose Portia. Keep writing. It's a delight journeying through your thoughts.

Eisha, you have drawn an exquisite comparison between a section of the magnum opus and the reality shows. In many cases, the winners are selected on the basis of where you come from, what you look like and how you politically correct you can be. As audience we too sometimes select the wrong casket and consequently lose beautiful Portia. Do keep writing. It's a delight journeying through the maize of your thoughts.