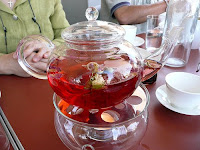 Strange as it may sound, I have never tasted tea. By that admission I may qualify as un-Indian for we all love chai, don't we? Well, I don't. My collagues have literally traumatised me by putting cups of chai in front of me, goading me to drink, but I have stood my ground. Never did like the look of it. Never got down to actually drinking it. I tasted tea for the first time last year. Shocked? But it's true.
It wasn't planned of course. I happened to visit a Persian chai joint at Imambada in the heart of Bhendi Bazaar. I discovered the bright blue Mughal Masjid (the only Iranian mosque in Mumbai), the Irananian hamam (bath) next to it and I found this really tiny joint called Cafe Khushali (meaning happiness in Persian) next to it. That's where I had had Iranian tea. Not to be confused with the Irani chai, which is a Mumbai staple, the Iranian tea is black tea. You put a piece of sugar in your mouth and sip the tea through your tea. It tastes awesome. I liked it because it didn't look like our ordinary chai - masala or not. After that, I did try out a couple of Arabian and Moroccon spice teas at Oxford Cha Bar at Churchgate (which my chai-loving pal dismissed off as mint-and-clove water). As for me, I couldn't figure why I should have mint or clove water. It was aweful.
It took me a whole year to actually try out tea again. The occasion presented itself yesterday. My friend had had a nasty lunch (I had made the mistake of recommending pasta to him while I comfortably tucked into my risotto) and was hungry. I took him to Tea Centre (Churchgate) for salads and sandwiches. I love the place. Unlike a coffee shop, this one allows for a more comfortable setting for mindless, idle conversations. It took my friend one and a half hours to tuck into his sandwich. The waiters were very patient. They didn't throw us out. They just suggested that we try some tea. After all, it is Tea Centre.

My friend asked me to select. I thought it was for him. I suggested rose tea. My friend asked me whether I would like to try it out. I was hesitant. Even when the bearer poured it into my glass cup, I wondered whether I should try it at all. I picked up the cup. Thankfully it smelt of rose. I loved the smell. I would have used the concoction as an inhaler if I didn't have to pay Rs 70 for a couple of cups. My friend asked me to try it. I held the cup to my lips, but couldn't sip. It was tea after all. I put the cup down. Second try. More rose steam. This time, I sipped it. And in a few minutes it was all down. I don't know whether I relished it. But it felt really good after it all went down. The honey, the rose and maybe the tea. I wouldn't mind doing it again. Who knows, I may actually become a rose tea connoiseur.
But chai...I don't think I have the stomach for it.
Posted by Innate Explorer at 10:26 PM

How many people do you know, Ms Eisha Sarkar, who get to a make a debut to the world of tea with Rose tea? Sure you are lucky and the first sip of the exotic variety of the tea would probably compel you to be a part of the aromatic world in which millions of people live. Like millions, I too start my day by kissing the tea with the passion of a morning lover and cupping the cup. And in return, the warm tea travels down the my throat, titillating and making love to each tissue it fondles along the way. I'm waiting for the day when you become an integral part of the the club that slobbers the tea with the zeal of a suitor.

I'll agree with Vishwas even though I love my coffee more than anything. You have to try tea one day Eisha! Though I probably will never forget attempting to tip a glassful of tea down your throat at the TOI canteen... :D