Can someone find me a map of Baroda? 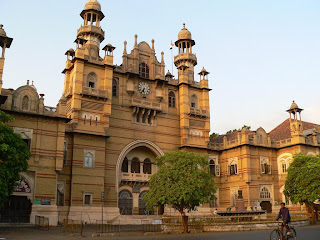 I have problems getting around Vadodara (I prefer Baroda somehow, so I shall stick to that). The streets of Baroda have no names. And if they do, not many use them. For someone like me who has stayed in Mumbai, where the authorities put in a lot of effort to name and re-name streets every year, this comes as a rude shock. I know the areas - Alkapuri, Sayajiganj, Racecourse Circle, Old Padra Road, etc but there's no way I can find a particular building without asking the locals for directions. Only the way to the station is obvious - just follow the direction Dr Babasaheb Ambedkar's statue points to.
I thought a map would help, but I haven't been able to find one I can use. When I told Elton about it, he suggested I go to my nearest desktop instead of a bookstore. "Check out wikimapia or google earth...it's all there, man. And it's better than what you get in the stores," he said. I reasoned, "For technologically-challenged people like me who want to explore the bylanes of a city like Baroda, I think I need a detailed printed map that I can show people if I am lost." Elton wasn't impressed. He prefers GPS on his phone.
I asked an uncle whether he could organise a map for me. After checking up with a few of his acquaintances he didn't sound too hopeful. He then tried his contact at the Vadodara Municipal Corporation. Yes, we could find a map of Baroda in the Corporation's diary. Only, it would be in Gujarati. What use is a map in Gujarati for someone who's new to Gujarat, I thought.
I then decided to try my luck at the Gujarat Tourism Corporation office at Narmada Bhavan. I called them up and a polite male voice told me that they would be really glad to provide me the maps and all other assistance I needed. I headed straight there. I was greeted by a woman receptionist who was more interested in the Gujarat Samachar than me. I asked her for a map of Baroda and she flinched. "We don't have maps of Baroda here. You can find them at any bookstore. We have a map but it is very small and not detailed. If you are ok with it, you can pay us Rs 10 and have it," she said. I didn't have much of a choice. Thankfully, she had a relatively detailed map of Gujarat in store. I purchased that too.
I then thought of checking out whether Umakant bookstore at Alkapuri would have them. On my way there, I stopped by a small bookstore near the railway station. "You will get maps on Baroda only in Raopura. Nowhere else," he said. Strange.On my way to Alkapuri, the driver stopped by another bookshop. He decided to check for himself this time - I had harassed him enough. He came back with a small booklet with Vadodara written in Gujarati. It opened up to a very well-detailed map of the city. The only glitch - it was in Gujarati. Still, I thought it was better to have a map in the local language than not one at all. It was a really good one and it cost just Rs 40, after all.
An architect-friend suggested I try out Landmark store near Inox (yes, malls are the landmarks here). Sure they had lots of maps - Ahmedabad, Gujarat, Mumbai, Rajasthan, Kerala, Goa, Bihar, UP, India, and even New York. But Baroda - again in Gujarati. I asked them for English maps. A salesman told me, "This year, for the first time a detailed map of Baroda had been published in English. But the publishers hadn't expected such a demand and we've had lots of orders pending. You don't see many tourists here so you don't expect people to buy maps. Most people who come visiting know someone here who takes them around." Seeing the disappointment on my face, he suggested, "You can buy a map of Baroda in Gujarati, if you want." No, I'll wait.
Posted by Innate Explorer at 3:10 PM

I agree with you that it is very difficult for any outsider to move in and around vadodara. I faced the same problems almost ten years ago when I came vadodara for the first time. I would like to raise this issue some or another way

hey... i know how difficult it can be without a map.. here in the US, there's a map of the city almost at every corner.. or at least every train station... in any case.. nowadays we do sadly have to rely on technology and the internet to get what we want... here's a link to the map of vadodara..

its the first thing you get with google search... but you can buy the map off these guys if you prefer the paper variety.. i always loved paper maps... one of the reasons i made them my career...

just thoguth would share my idea..If youplanning to coem to baroda.. then u should have a guide rather trustig on maps.. cause they lead u no where..so from now onwards.. if u guys are planni to come back to baroda.. then make few friends before coming and your problem will be solved

For someone who traveled most of the city of Mumbai sans map, going into the absolute bylanes and everything, I have to say Eish, your standards are dropping :P. Ek kaam kar, take a week, go with someone who has lived in Baroda for a while, and get to know the city properly. Given your memory of location, I think you'll be fine!

PS: Was this the first post on which you actually commented?

Interestingly enough, I was commenting just yesterday that for a town that seems obsessed with adding "modern" structures (aka malls), the civic authorities are still stuck in the pre-industrial age. No street names (let alone signs), no sidewalks, lousy roads, cows, stray dogs etc.

That there are no real maps available is no surprise. This is a word of mouth and not a documented details kind of place.

Having said that, it does get easy to get around once you get used to the landmarks (malls, circles ...).

The fact that in the end it is still a really small town only makes it easier.

Yeah Kamal, I'm still trying to find my way from one 'circle' to the next and one mall to another. But I'm missing the road names so much that I am seriously thinking of naming some of them myself like Inox Road, National Plaza Road, Kamathi Baug Road, etc.

Kamaal hai, is this a comment section or a delayed-IM conversation?!

Well, all my life I never felt the need to lookup for a Baroda Map...but then, its never been city big enough to have one..that too in english. A Gujarati version of Taj Mahal on O P Road would certainly help matters...tsk tsk ...is someone listening :)

Unfortunately, finding a detailed map of Baroda (especially online) is a dream which may not come true any time soon. Here is one: http://www.mapsofindia.com/maps/gujarat/vadodra.htm

Google maps are not detailed for Baroda. I was born in Baroda and raised in Delhi and live in the US now. My parents have moved back to Baroda now, so I visit them there. There are no street names so it is very frustrating to orient yourself. People find places by buildings they are next to.

Try this bookstore when you are there, it might have something: