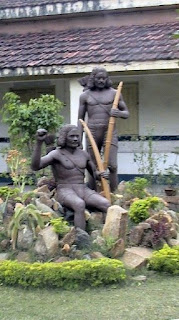 The image of J R D Tata on a steel tube, a 225-acre park at the heart of an industrial township, lavas of molten steel, Raj-styled mansions with manicured gardens, golf events for 10-year-olds and the night sky that never turns black thanks to the glow from the blast furnace -- Jamshedpur seems to be caught in a time-wrap. India's steel capital is also its first planned city and allows for a lifestyle that many in Mumbai would want to afford. It may be a 30-hour train-ride away from Mumbai, right in the hinterland (Jharkhand), but it still has the highest per capita income in the country and a literacy rate of 82 per cent.

How to get there

Kingfisher Red operates two flights daily from Kolkata. The airport is rather modest and doesn't have facilities that you would find at bigger airports - namely a conveyor belt - so don't be surprised if porters pick up your luggage.

Trains are the better option. Tatanagar is an important railway junction on the South Eastern Railway and is connected to Kolkata, Mumbai, Delhi, Chennai, Bangalore.

You can also hire a car at Ranchi drive down through some of the densest and oldest forests in the world that lie on either side of the National Highway. It’s a three-hour drive but it’s advisable to avoid the darkness.

Tata all the way

The city was founded by Jamshedji Nusserwanji Tata remains the way he had envisioned it (well, almost). The city does not have a municipal corporation and all utilities are provided by the Tata group.

Besides Tata Steel and Tata Motors, other Tata concerns also have a presence here. The blast furnace and the smouldering mountain of slag (the remnant of the ore after iron is removed), located in the city's centre have turned into tourist attractions.

At the Tata Motors plant, you find how a truck is assembled in less than 40 minutes (the recession has decreased production by 80 per cent). And if that isn't exciting enough, a ride in one of them at 90 kph in a maut-ka-kuaan-like circular test-track will do the trick.

If you want a slice of history, the Centre for Excellence (designed by Hafeez Contractor) is the place. While it contains several artefacts pertaining to the city and its founders, it also boasts of the only collection of M F Husain's acrylic-on-glass works in the world. And of course, there's the surprise package: 'JRD on a steel tube.' (You need to be there to figure this masterpiece).

As for a place to stay, the Tata guesthouse is your best bet as it offers you a chance to live the imperial life.

The Tribal Culturally Society (TCS) at Sonari is the gateway to a culture that few urban-dwellers know of. The 16-year-old TCS aims to better the weaker sections of the community by providing basic education (in some cases achieving even functional literacy is a very commendable task), clinics and preservation of tribal heritage that is almost on the brink of extinction.

The bust of Bhagwan Birsa Munda, the famed tribal leader who took part in the Revolt of 1857 against the British greets visitors to the entrance of the TCS museum. In the midst of marigolds stand two mammoth statues of Sidhu-Kanhu, who were freedom fighters.

TCS showcases the lifestyles of various tribal communities. There are 30 different tribes in Jharkhand, out of which only five are 'visible'. The four main tribes of the region are Santhals, Ho, Birhor and Munda.

The TCS museum houses a range of tribal artefacts - totkos that are used to harness oxen, wind instruments, a Birhor hut made of leaves (Birhor is a primitive tribe that inhabits the jungles of southern Jharkhand bordering with Orissa), terracotta figurines and even a jacket made of bamboo shoots. Also present are ornate masks worn by Chhau dancers.

Jubilee Park: A 225-acre park right in the centre of the city offers a wide range of attractions - zoo, a laser-cum-fountain show, flower shows, etc.

Dalma hills: It's home to a large elephant reserve. The best time to go there is October-March.

Dimna Lake: Nestling at the foot of the Dalma hills, it is an artificial reservoir and one of the main sources for the city's drinking water. The lake has facilities for water sports like jetskiing, rowing and water scooting.

Domuhani: The scenic confluence of Kharkai and Subarnarekha rivers. Domuhani, situated at the extreme north-west point of the city, is a popular picnic spot.

Food: While most hotels serve the regular Indian-and-Chinese fare, try local delicacies such as litti (made of sattu) with baingan ka bharta and mutton gravy. Also try out the local Bihari sweets such as Khaja and Thekowa. As for snacks, Fakira Chanachur at Bishtupur is the place.