My graphotherapy story Write away your problems has been published on the Times Wellness website. Do check it out and let me know your comments.
Here is the link
http://www.timeswellness.com/index.aspx?page=article&sectid=6&contentid=2009022120090220192450330691a7cbd&sectxslt=

Write away your problems

A few deft strokes of the hand can save you from a stroke. If graphologists are to be believed then the pen may be the key to solve all problems

Your penmanship might be able to help you solve all that ails you – mounting credit card bills, that obnoxious colleague, the snoopy neighbour, the irritable partner, the irreverent child, the uncompromising mother-in-law and of course, the boss – that make your stomach churn and cause a heartburn.

Write to de-stress
Just a slight change in your handwriting can change you and your life. With stress becoming an inevitable part of urban lifestyle, an increasing number of people are taking to alternative forms of therapy to seek relief and reprieve from day-to-day pressures.

Dr Parag Khatri, a dentist started dabbling in this science since his school days. But it was only during his college years, did he start looking at it as more than just a mere hobby. The Andheri-based doctor, who presently is the director of World School of Grapho Education and Therapy says, “People are now more aware of the science and how it can help them in removing obstacles in their lives and overcome stress. By studying a person's handwriting, we can understand his personality traits. We identify the problem areas and then recommend certain writing exercises for a period of 30 days. If you sincerely do them, you will definitely see the change in you."

It's all in the mind
"Graphotherapy is a means of making conscious alterations in your handwriting in order to effect desired subconscious changes within yourself. This is a reversal of the normal writing process. It involves giving a reverse suggestion to your brain that will induce a permanent change in the individual. If there are multiple problems, we suggest multiple exercises that are concerned with changing the formation of just one letter at a time," explains Dr Khatri.

"People think if you change your handwriting, you can change yourself. That's not the way graphology works. You have to change and that change is reflected in your handwriting. It takes 21-30 days for new cells to grow in the body. You need to plant the seed for change and wait for it to grow during that period," says Oshiwara-based handwriting analyst Suman Kalra. Kalra, who started seven years ago 'when people still associated graphology with occult', now sees many people coming to her to find a way to control their anger and boost their confidence.

The pen goes 'cyber'
When Vashi-based journalist Vishwas Heathcliff decided to go beyond his weekly newspaper column Write Choice and started his own graphology blog last year, he was surprised at the response he got in cyberspace. In a few months' time Vishwas's blog was flooded with comments from people from all walks of life asking for tips to improve their handwriting (and, in turn, their lives) to inquisitive college students who wanted to take up graphology courses.

A small stroke goes a long way
For many, the simple art of writing has made a whole lot of difference. Some care exercised in the i's are dotted can ensure a good concentration. A slight alteration in the size of handwriting before studying, can help those whose mind fly away very between the lines. One Vikram Shah comments on Vishwas's blog: “Can you guess that improving handwriting can be so powerful that one can get a national award for his improved performance? I like and love my own handwriting. I have become patient and less aggressive, say my wife and children. They ask me how I changed so much over a small period of time. I got the Bhariya Udyog Ratna award recently for outstanding performances and innovative thinking.” 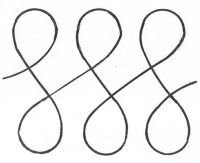 While Shah has managed to achieve much more than he had expected when he started his exercises, Vishwas himself is glad he had first taken up the course two years ago. "I used to be over-sensitive and would get angry very easily. I did the exercises and found that I had changed for the better. There is a special handwriting exercise in graphotherapy which helps one deal with stress and relax. It's called Figure 8 exercise. There is a theory behind the effectiveness of the exercise. It says:
The psyche is made of three parts: the id, ego and superego.
The id is reflected by the lower zone of small letters. The lower zone represents your unconscious needs (physical, material and sexual).
The ego is reflected by the middle zone letters such as a, c, e, i, m, n etc. Middle zone indicates our daily life.
The superego is seen in upper zone strokes such as b, d, and h.
While doing the exercise it has be ensured that proportions of the loops in figure 8 are equal. This ensures a balance between physical (lower zone), mental (upper zone) and emotional (middle) world. When there is a balance, we are at peace with ourselves.

As for those skeptics who don't believe in making those t's tall and crossing them high, Vishwas says, "Neither does it involve elaborate exercises nor does it cost a great deal of money. And at the end of 21 days, you lose nothing but some bad habits. So you may as well give it a shot."

Posted by Innate Explorer at 2:38 PM