One Saturday in early March, we decided to pack a set of clothes and drive off from home in Vadodara up north. Though the avid birdwatcher in me wanted a pit-stop at Thol Lake near Ahmedabad, the rising mercury brought me to my senses and we decided to head to the Sun Temple at Modhera, 102 Km from Ahmedabad. It is one of the most beautiful pieces of architecture in India, a country that boasts of the Taj Mahal, the Jantar Mantar, the temples of Khajuraho and Madurai, etc, etc. It was also my first time inside a step-well. I had been to Adalaj before but because of the renovation efforts, we were forbidden to climb down the steps to the water. Modhera was just as it promised to be (which is why it is also on the cover of India Guide: Gujarat). Here are some shots: 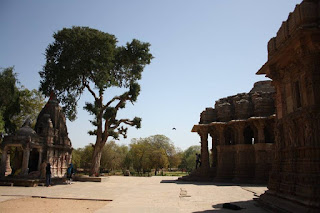 Posted by Innate Explorer at 12:28 PM

thats a feast for your eyes for sure