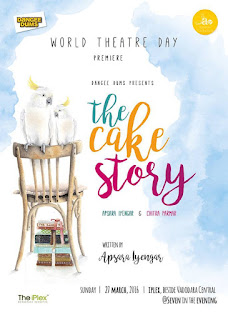 I had the privilege to be audience to one of the most talented theatre companies in Vadodara called Applause Vadodara's fantastic production, The Cake Story. Written by Apsara Iyengar, the play depicts feelings and emotions that go through the minds and hearts of women. Both Apsara and her co-actor, Chitra Parmar, were brilliant. On the occasion of World Theatre Day, I was surprised to be called to talk to the audience after the play. Since I am quite a novice at public speaking, I thought of penning down my speech. Here it is:

When Apsara asked me to talk about theatre, my first reaction was, “But I am not a theatre person. I don't know much about drama.” She asked me. “So what kind of person are you? What do you do?” I told her, “The only thing that comes to my mind when I see a stage is dance. I am more of a dancer than an actor.” As I finished the sentence, I realised how ridiculous it sounded. “Isn't dance a form of theatre? Do we not act?” I asked myself. “And do we not gesticulate, act, play our parts in real life as well? The world's a stage, as Shakespeare wrote, and all men must play a part.”

It's amazing how something as basic as acting has become so niche. A child uses actions before he or she learns words, art before he or she can read or write and sound before he or she can speak. And yet, as we grow older and supposedly wiser in our use of technology and busier at work, we keep dropping them one by one. First, we let go of drawing and colouring. Who has the time for that? Then music is left for the commute or leisure. Our vocabulary of actions gets narrower and narrower with institutionalised education. We get so caught up in the rat-race that we forget to appreciate the gifts of the arts.

I teach English often to people with whom I have no other language in common. They come from places such as Afghanistan, Khyber-Pakhtunkhwa in Pakistan, Iraq and Iran. When they do not understand a word I say, I have to act it out for them. It's like dumb charade. But it's not a game. Drama is a very important tool in education. I had the privilege of documenting actor Swaroop Sampat's workshops on the use of drama in education when I was working with UNICEF in Gujarat. She enabled girls and teachers from remote tribal areas to understand the concepts of maths, science, history and marketing using statues, skits, action-songs and plays.

India has an oral tradition of knowledge-transfer. And we like visuals more than words. This is where theatre becomes a very important tool of communication. I go back to UNICEF again. In order to propagate awareness about education, girl-child rights, immunisation campaigns, women's health and hygiene in villages, we used bhavai. In spite of the advent of television, radio and cellphones in many villages, hundreds of people gathered to watch ranglo and rangli. Bhavai connects with people in their local dialect, using local expressions and so our messages were customised towards the audience that had gathered – whether it was the whole village, or majority women, anganwadi workers or youth. The effectiveness of a medium can be judged by how much it resonates with the audience and we were very glad that the audiences across villages in Bhavnagar, Kutch, Baroda, Rajkot, Valsad and Banaskantha districts had taken home the message the medium delivered.

Why is theatre important? It teaches us to explore our bodies, our expressions and ourselves. It enables us to become people we could only dream of becoming. It's aspirational. I teach at the Faculty of Journalism and Communication at MSU and every year the students do a folk media presentation. I have seen some of the very shy students essay powerful characters on stage. They overcome their inhibitions and become prominent team-players. Theatre also helps us to connect with all kinds of audiences everywhere irrespective of their nationality, language, age, religion, education, etc.

Why do we need more of theatre in Baroda? We're living in an increasingly globalised world. Even Bollywood movies cater more and more to the diaspora. While we all enjoy cinema, we need media that engage with us at the local level. We have radio that does a pretty decent job, we have short films on YouTube, we have art exhibitions and song and dance festivals. But we need something that tells us stories about people like us using our words and actions within a real space allowing for instant feedback. Only theatre can do that.

Posted by Innate Explorer at 9:31 PM