Why the Scorpions remind me of an Indian violonist

There are songs that remind you of certain people. Scorpions' The Wind of Change reminds me of violinist Balabhaskar from Kerala. He had performed with Sivamani and Taufiq Qureshi at a concert in Vadodara in 2010. I've watched Sivamani perform many times, but that was the first time he was overshadowed by a violinist. Balabhaskar rocked the audience. My friend, Vidisha Patel  and I were floored. At midnight, the two of us were sitting in 24 Carats at Express Hotel for dinner when we spotted the musicians. Vidisha had a fan-girl moment so I walked to Balabhaskar to get his autograph. We started chatting and he talked about Scorpions. Since then, their music has reminded me of that night. In 2018, Balabhaskar was killed in a road accident in Kerala. 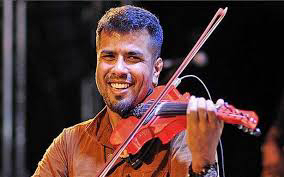