I read the book, Love in the Time of Cholera by Gabriel Garcia Marquez and would recommend it to all those who love romance or literature or both. The book's a masterpiece. It's racier than Marquez's phenomenal One Hundred Years of Solitude. As much as I appreciate Marquez's creative genius, I would like to make a special mention of Edith Grossman who translate this book from Spanish to English and brought to life Marquez's characters. The book has also been made into a movie.

LOVE IN THE TIME OF CHOLERA: A REVIEW 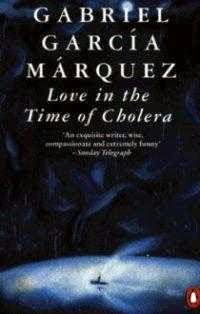 Gabriel Garcia Marquez's Love In The Time Of Cholera, with its interlocked love stories on the various kinds of relationships of love between men and women, set in an unnamed Caribbean seaport in the backdrop of the ravaging civil wars and the cholera epidemic (in the late nineteenth and the early twentieth century) spans a period of fifty one years, is a perfect example of Marquez's willingness to experiment and adds to his stylistic repertoire. This story encapsulates love, desire, jealousy, death, chaos, passion, eroticism and the undying spirit of the place.

The story revolves around Florentino Ariza, who is overwhelmed by Fermina Daza, (her teenage beauty and her gait). Exchange of love letters under the supervision of Fermina?s Aunt Escolastica results in a disaster as Fermina?s father, Lorenzo Daza discovers them and decides to take his daughter away from the port and Florentino because of his class.

After years of travel when Fermina finally returns to the port, with broadened horizons, she inexplicably tells Florentino to forget it and agrees to matrimonial ties with the Paris-returned Dr. Juvenal Urbino, well known for his innovative methods to curb the spread of the epidemic of Cholera. A devastated Florentino turns to his six hundred and twenty-two erotic assignations with prostitutes, widows and aged women, but still considers himself a virgin untouched by anything but his undying love for Fermina. Florentino's love relationships might bear a close resemblance to the legendary Casanova, in number and kind, the only difference being that Florentino maintains throughout those 50-odd years that he is a virgin. Marquez does bring out the essence of love.

After fifty-one years, Florentino's wait is finally over. Dr. Urbino dies an accidental death while chasing a parrot at the age of eighty-two culminating the 'marriage of convenience'. He never loved Fermina but always believed that the seed of true love would germinate in their marriage. It never did. What did exist was dependency that one had on the other.

Florentino, who by now has climbed up the social ladder, does not want to ruin this opportunity. His love letters this time are more precise and he manages to convince Fermina to accompany him on a steamboat voyage down the River Magdalena in the midst of yet another civil war, much to the disgust of her daughter and bewilderment of her son. At the fag end of their life, they finally manage to fall in love with each other all over again and find togetherness amidst the epidemic of cholera, as Florentino Ariza remarks, "Love becomes greater and nobler in calamity amidst the nauseating stench of corpses floating down the river, and the vast silence of a ravaged land."

Love In The Time Of cholera, unlike Marquez's other novels including One Hundred Years of Solitude and The Autumn of the Patriarch maintains a folktale quality, with a feel of everyday gossip. The story moves back and forth in time. This ploy of Marquez's to maintain the reader's interest succeeds without much effort on the behalf of the reader. The story embodies the two starkly contrasting elements, the sacredness of pure love as well as the horror of reality, depicted by the epidemic of cholera and the civil wars.

The reader wishes to sympathise with Florentino's plight of a dejected lover waiting for his loved one but his evil thoughts of seeing Dr. Urbino dead, so that he can have Fermina for himself, makes the reader think otherwise. Though it is human to be pained, is it justified on his behalf to wish for the death of a man especially one who had done so much for his people (Dr. Urbino had founded the Medical Society, had organised the construction of the first aqueduct and the first sewer system and served as president of two academies and is conferred with honorary titles of other organizations during his lifetime).

At the end of the story, when the couple finally gets together after half a century, the reader is filled with mixed emotions. After the first reading, the reader is thoroughly confused, unable to figure out why the story ends in this way. True to his unique style of writing, (which is full of contradictions) Gabriel Garcia Marquez manages to get the reader to read the book over and over again.

In this novel Marquez describes, the development of love and its various aspects in the rather profane environments of convenience. All the meaningless forays of everyday life shared by two people thus bound together -- all the rather unpleasant smells, degrading tasks, and dulling routines; all the unspoken bitterness and rancor; all the sullenness and gloom of unlived possibilities - are here unmercifully catalogued.

Along with the personal signs of decay that arise with the aging process and which are experienced in the lives of Florentino and Fermina, one simultaneously witnesses the aging of Latin America and the world-at-large, as evident in the following lines: - The passengers are unnerved not only by such vivid, horrific images but are sadly haunted as well by all that is forever lost: the alligators ate the last buttery and the maternal manatees were gone, the parrots, the monkeys, the villages were gone: everything was gone.

A friend, who hadn't read any of his novels before, described Marquez's style as rather unusual and very interesting, but claimed that the book is too voluminous and would have been better if certain portions would have been edited. Love In The Time Of Cholera is not the average romantic novel with a couple of protagonists and their experiences and passions. It may have been set in a distant land by the Caribbean a long time ago but it is as relevant in this part of the world at present when the world is being torn apart by wars. Everlasting love in the times of war and disease is still possible, no matter however cynical one is.

Posted by Innate Explorer at 10:37 AM