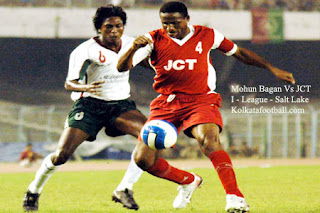 OOTBALL MANIA
Kolkata means football. There are several football clubs in Kolkata out of which the most prominent ones are East Bengal, Mohammedan Sporting and Mohun Bagan. Mohammedan Sporting owns the largest football stadium in Kolkata, right next to the famed Eden Gardens. Each club has its loyal support-group. The in Kolkata root for Mohammedan Sporting, those who hail from East Bengal/Bangladesh (aka Baangaals) cheer for the strikers of the East Bengl Club, while Mohun Bagan finds support among ethnic Kolkatans. Club wars are very common here (much like Manchester United vs Arsenal) and even the riot police is called in when there is a major clash between the giants.

GOOD CHINESE BOOTS
Want a pair of patent-leather custom-made Chinese boots? Head to Bentick Street in Kolkata. I bought my flat-soled dark-tan, patent-leather, ankle-high boots from Fook Soon Hin - High Class Shoe Manufacturers at 38, Bentick Street. It's located right opposite the Tipu Sultan Shahi Masjid. And it cost me just Rs 550. (I saw a similar pair at Linking Road, Bandra that had a price-tag of Rs 2,500.

NO DOODH, ALL PAANI
Milk is scarce in Kolkata and in parts of South 24 Paraganas district. Till a few years ago, you had to stand in a queue (similar to that outside the ration-store) to get milk from the milkman. The milkman would confess to diluting the milk by at least 60 per cent to make it available to so many people. Housewives in rural Bengal use milk judiciously to:
1.make tea
2. give it to infants or the sick. Women actually add more water to the milk to aid digestion. Probably milkmen got the cue from them and started doing it themselves.
3. make mishti doi

People often asked me whether I liked fish, I answered in the affirmative only to discover hilsa or rohu (carp) on my plate. I had to explain my preference for seafood that no true-blooded Kolkatan Bengali will even want to taste.

THE WALAS
While sabziwalas (vegetable vendors) and machchwalas (fishmongers) do the rounds of Kolkatan neighbourhoods every morning, there are some uncommon door-to-door businesses that thrive too.
Posted by Innate Explorer at 1:19 PM

Nice one sarkar... finally stuff written by you that I enjoy reading! :P