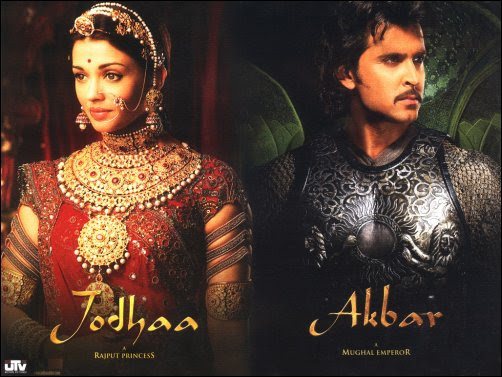 Jalaluddin Mohammed Akbar was a short, fat (he had a paunch), dark, bow-legged and ill-tempered man who ruled Hindustan (the description comes from his biography - Akbarnama). How on earth does Hrithik Roshan fit the bill to play the character? But then, who would want to splurge Rs 250 on a movie ticket to see an 'ordinary-looking' Akbar. Hence, Mr Roshan had to step in. He had to swagger like he did in Dhoom 2, jump onto an elephant a la Krrish and even fight the bad guy single-handedly like Brad Pitt did in Troy (Hrithik wore stockings while Brad had donned the mini-skirt). Akbar was bow-legged, so he couldn't ride a horse, but Hrithik does. He also fights elephants as Akbar would, but looks mortally terrified while facing the beast.
But hey, this ain't a chapter from history but Gowarikar's creation. So what id Jodhaa was never Malika-e-Hindustan or Akbar's wife but a concubine in his harem! Never mind. Aishwarya Rai-Bachchan looks pretty as a queen as she flaunts jewellery created by Tanishq. Watch her during the glycerine scenes when the white of her eye turns a shade of red that matches that of her outfit as well as the walls.
The picturisation of the song, Marhaba Marhaba reminds me of the Jan 26 Republic Day Procession at Rajpath. Gowarikar's narrative reminds me of Sanjay Leela Bhansali's in Devdas.
Nitin Desai's sets actually look like sets. You can tell the PoP. Worse, Gowarikar has shot some portions of the film at the Amer Fort while some others have been shot at his studio at Kalyan. You can tell the difference between the two. What's the point of using the fakes when the real one is so beautiful?
The dialogues are in Persianised Urdu. Hrithik tried hard to mouth those words, but his efforts are very visible. The audience kept groping, "What did he say? What does it mean?" Lagaan too had a lot of Avadhi, but Lagaan was fast-paced. Jodhaa Akbar relies on dramatisation and dialogues. The dialogues are beautiful but what is the point if the audience doesn't understand them?
There's not much of a story there. Akbar's expanding his empire. The Rajputs want to put up fight. But the Maharaja of Amer wants peace and gives his daughter, Jodhaa's hand to Akbar. Jodhaa's not happy; Akbar can't consummate his marriage (it takes him six months in the film to finally do it. During his reign he would have married six times in that period). Akbar's nurse Maham Anga (Ila Arun) is jealous of Jodha and wants to separate the two. Throw in Soojamal (Sonu Sood) who plays Jodhaa's brother and Sharifuddin, Akbar's bro-in-law and you have melodrama, revenge, action and the final justice is delivered. Watch the movie for the songs, their picturisation, fight sequences and two actors - Sonu Sood and the guy who plays Behram Khan (young Akbar's guardian) - i haven't seen a scarier face in my life!
Posted by Innate Explorer at 7:33 PM

Excellent observations. At last a review not backed by any producer's middlemen. The dialogs are used among my friends as fun liners, without anyone of us understanding a single word out of it, to ridicule each other. Every sentence nowadays is ending with "Takhliyaan" :) :). And rightly so, Sonu Sood was the only actor that suits his character the best.