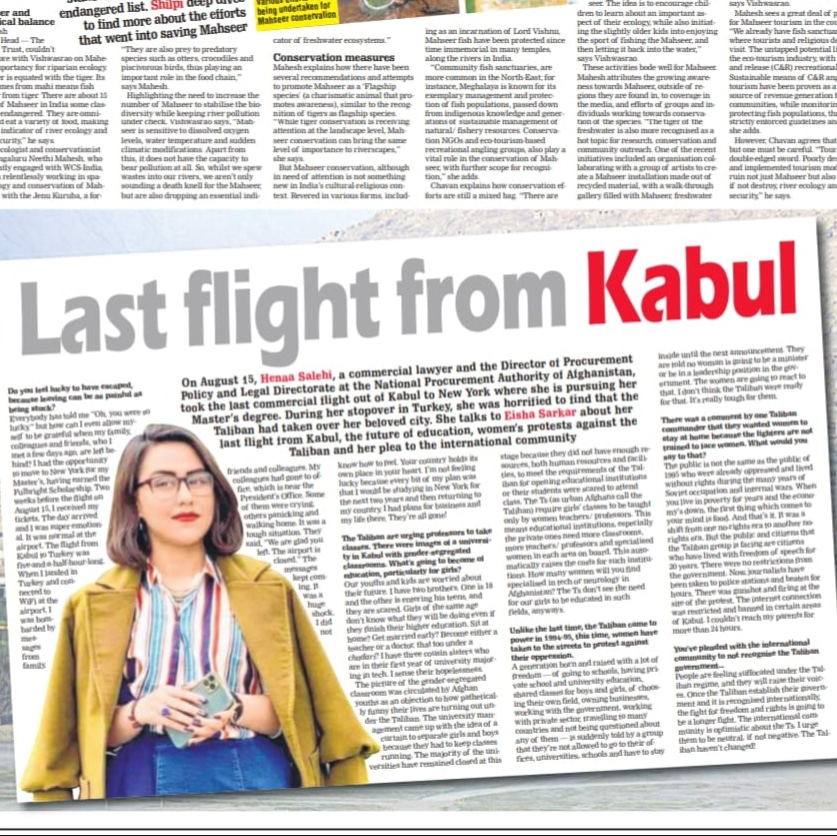 On August 15, Henaa Salehi, a commercial lawyer and the Director of Procurement Policy and Legal Directorate at the National Procurement Authority of Afghanistan, took the last commercial flight out of Kabul to New York where she is pursuing her Master’s degree. During her stopover in Turkey, she was horrified to find that the Taliban had taken over her beloved city. She talks to Eisha Sarkar about her last flight from Kabul, the future of education, women’s protests against the Taliban and her plea to the international community

Do you feel lucky to have escaped, because leaving can be as painful as being stuck?

Everybody has told me “Oh, you were so lucky,” but how can I even allow myself to be grateful when my family, colleagues and friends, who I met a few days ago, are left behind? I had the opportunity to move to New York for my Master’s, having earned the Fulbright Scholarship. Two weeks before the flight on August 15, I received my tickets. The day arrived and I was super emotional. It was normal at the airport. The flight from Kabul to Turkey was five-and-a-half-hour-long. When I landed in Turkey and connected to WiFi at the airport, I was bombarded by messages from family, friends and colleagues. My colleagues had gone to office, which is near the President’s Office. Some of them were crying, others panicking and walking home. It was a tough situation. They said, “We are glad you left. The airport is closed.” The messages kept coming. It was a huge shock. I did not know how to feel. Your country holds its own place in your heart. I'm not feeling lucky because every bit of my plan was that I would be studying in New York for the next two years and then returning to my country. I had plans for business and my life there. They’re all gone!

The Taliban are urging professors to take classes. There were images of a university in Kabul with gender-segregated classrooms. What’s going to become of education, particularly for girls?

Our youths and kids are worried about their future. I have two brothers. One is 18 and the other is entering his teens and they are scared. Girls of the same age don’t know what they will be doing even if they finish their higher education. Sit at home? Get married early? Become either a teacher or a doctor, that too under a chadari? I have three cousin sisters who are in their first year of university majoring in tech. I sense their hopelessness.

The picture of the gender-segregated classroom was circulated by Afghan youths as an objection to how pathetically funny their lives are turning out under the Taliban. The university management came up with the idea of a curtain to separate girls and boys because they had to keep classes running. The majority of the universities have remained closed at this stage because they did not have enough resources, both human resources and facilities, to meet the requirements of the Taliban for opening educational institutions or their students were scared to attend class. The Ts (as urban Afghans call the Taliban) require girls’ classes to be taught only by women teachers/ professors. This means educational institutions, especially the private ones need more classrooms, more teachers/ professors and specialised women in each area on board. This automatically raises the costs for such institutions. How many women will you find specialised in tech or neurology in Afghanistan? The Ts don’t see the need for our girls to be educated in such fields, anyways.

Unlike the last time, the Taliban came to power in 1994-95, this time, women have taken to the streets to protest against their oppression.

A generation born and raised with a lot of freedom — of going to schools, having private school and university education, shared classes for boys and girls, of choosing their own field, owning businesses, working with the government, working with private sector, travelling to many countries and not being questioned about any of them — is suddenly told by a group that they’re not allowed to go to their offices, universities, schools and have to stay inside until the next announcement. They are told no woman is going to be a minister or in a leadership position in the government. The women are going to react to that. I don't think the Taliban were ready for that. It's really tough for them.

There was a comment by one Taliban commander that they wanted women to stay at home because the fighters are not trained to face women. What would you say to that?

The public is not the same as the public of 1995 who were already oppressed and lived without rights during the many years of Soviet occupation and internal wars. When you live in poverty for years and the economy's down, the first thing which comes to your mind is food. And that's it. It was a shift from one no-rights era to another no-rights era. But the public and citizens that the Taliban group is facing are citizens who have lived with freedom of speech for 20 years. There were no restrictions from the government. Now, journalists have been taken to police stations and beaten for hours. There was gunshot and firing at the site of the protest. The internet connection was restricted and banned in certain areas of Kabul. I couldn't reach my parents for more than 24 hours.

You’ve pleaded with the international community to not recognise the Taliban government...

People are feeling suffocated under the Taliban regime, and they will raise their voices. Once the Taliban establish their government and it is recognised internationally, the fight for freedom and rights is going to be a longer fight. The international community is optimistic about the Ts. I urge them to be neutral, if not negative. The Taliban haven’t changed!

Posted by Innate Explorer at 9:03 AM