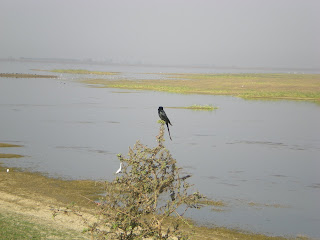 Got birds on your birds? Head towards Wadhana Wetlands to enjoy birdwatching
By Eisha Sarkar
Posted On Thursday, February 26, 2009 at 07:10:02 PM

A conversation on birdwatching sites in Gujarat with Dr Pradeep Mankodi, a professor of Biology at the M S University, Vadodara, introduced us to a remote birdwatching site in Dabhoi Taluka. Wadhwana is not plotted on the map. It is an irrigation reservoir developed by Maharaja Sayajirao Gaekwad of Baroda state way back in 1909.
To get there, we had to literally ask the locals for directions to the next big landmark. But the quest to find one of the largest congregations of waterfowl in Gujarat and a curiosity about how it could possibly survive in the midst of urbanisation lead us on. We passed by sleepy villages at the crack of dawn (we'd started from Vadodara at 5.30 am) and were greeted with an assortment of birds and animals - camels, water buffaloes, bulls, peacocks and black-faced baboons. However, nothing could have prepared us for what the Wadhwana wetlands had to offer on an early Sunday morning - tens of thousands of wild geese and ducks, among other migratory birds.
How to get there: It's a one-and-half hour drive from Vadodara city to the 3000-year-old city of Dabhoi. From there you literally have to ask your way around to Hira Bhagol and then to Wadhwana reservoir. The wetlands are not plotted on the map and only recently has the Gujarat government acknowledged it as an eco-tourism site.
A naturalist's delight: The 10-km Wadhwana reservoir sees over a lakh avian vistors every winter. There are nearly 1,000 Grey Lag Goose commonly known as Gajhans that fly down from Central Europe and Siberia. A few Bar-headed geese known as Rajhans also come here from Tibet, Ladakh and the Mansarovar Lake region. Other species found here are Coot, Brahmi Duck, Spot Billed duck, Wigeon, Little Grib, Gadwaal, Soweler, Lesser Whistle Tail, Pochard, Mallard ducks, Sandpiper from Siberia, Ibis, Sarus Crane, Ruddy Shelducks, Northern Shovellers, Greylag Goose and Black Necked Grebe.
The Migratory birds come here in October and remain there till mid-April. The birds favour a particular type of weed known as Hypomea for nesting purposes, which is found in abundance at the lake.
Eco-tourism: The government recently started promoting the site for eco-tourism. There is a tourism office on site but facilities are really limited. There are ten rooms available that can be booked. The local official-cum-guide-cum manager points out to the Interpretation Centre (where you find models of the waterfowl visitors) that remains closed for most part of the year. "Few people know about this place. Most people who come here are researchers so they don't need such basic information. We open the place for children and other tourists who want to know about birds," he says.
There are three watch-towers too - but they're more for keeping a tab on herdsmen and their unruly cattle and poachers. Besides there is a cafetaria, but it is always advisable to make your own food arrangements.
Predators turn protectors: Till a few years back, local villagers and tribals would hunt waterfowl for their livelihood. The villagers of Simaliya, Kali Talavadi, Gopalpura, Amarpur, Manjrol and Wadhwana, the hamlets, which surround the reservoir, knew little about the importance of migratory birds. But now, many of them have turned into self-taught ornithologists and guides who rattle off birds's names to visitors. The wetland is not even declared as protected and there are countless entry and exit points but the villagers's vigil helps keep poachers at bay.
Best sightings: The best time of the day for bird-watching would be from 6.30 am to 10 am during the months October-April.
What you need: A powerful set of binoculars, a good camera with a powerful zoom, hiking shoes, dull-coloured clothes (avoid bright colours and white), a blazer or jacket (it gets really windy in the mornings), water/beverages and food packets (but please make sure you do not litter), mosquito and insect repellent.
Don't:
1. Talk too loudly and/or shoo the birds away.
2. Litter.
3. Run along the shoreline where there are nests..
Here's the story on Mumbai Mirror.
http://www.mumbaimirror.com/article/79/200902262009022619100290440cf0d57/Feathered-delights
Posted by Innate Explorer at 12:20 PM