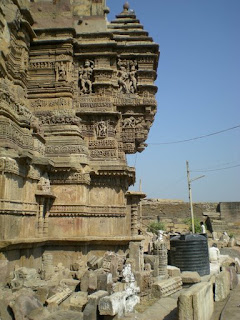 Few tourists venture into small-town Gujarat. While big cities such as Ahmedabad, Vadodara, Jamnagar, Surat, Dwarka and Bhuj are regulars on tourist itinery, the countryside offers much more than most other states. There are two reasons why you should undertake journeys to such places - one, the roads are excellent, more so in south Gujarat where they are lined with banyan trees and two, you will certainly pass by monuments or relics that date back to several hundred years.
DABHOI FORT
Ask anyone at Dabhoi where the Wadhwana wetlands are located and they give you directions to the Hira Bhagol or the eastern gate of the old Dabhoi Fort.

How to get there: An hour's drive from Vadodara. It is around 60 kilometres from Rajpipla.
Slice of history: Dabhoi was established in the early 6th century AD. Its foundation and fortification is ascribed to King Siddhraj Jaisinh (1093-1143 AD), who made this his frontier fortress. The fort of Dabhoi (originally called Darbhavati) is one of the rare surviving examples of Hindu military architecture, based on the shastri traditions described in various Vaastu scriptures. The famed battle of Dabhoi was fought on April 1, 1731 between Sarsenapati Trimbakrao Dabhade and Bajirao Peshwa.

Tourist spots: There are four gates in the town, one in each cardinal direction, having indirect entry, located in the middle of each side of the fort wall. It was altered during the time of Visaldev and the Muslim rule. Hira Bhagol (named after the architect, Hiradhar), the most exquisitely carved gate with Khajuraho-type sculptures of gods and goddesses, is in the east, with Vadodara Gate in the west, Champaner Gate in the north and Nandod Gate in the south. The Archaeological Survey of India is currently renovating these ancient relics.

KARNALI
Known as the "Benares of the South" Karnali on the banks of River Narmada has all the trappings to make for an ideal place of pilgrimage and meditation i.e. if you miss the narrow bylanes and shops selling farsan and jalebis for breakfast. 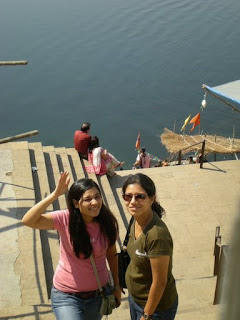 How to get there: You can take State Transport buses, or the hired cars and taxis from the city of Vadodara. It can take around one and a half hour to reach Karnali from Vadodara by road.

Tourist spots: There are two famous temples here at Karnali, over and above many other temples. The first temple is of Lord Shiva, which is known as Rameshwar Mahadev temple. It is said that the lord Moon performed a severe tapasya here at the spot of this temple. The Lord Shiva and Lord Vishnu were very happy due to this and created this famous temple here through the help sof Lord Moon. This temple is very ancient, around 3,000 years old. The other famous temple, Kuberaj Mahadev Mandir is of Kuber Bhandari. It is said that the King Kuber had sought refuge here while he was running away from Ravana. Both these temples are situated on two different ghats of the River Narmada. There is also a temple dedicated to Lord Garudeshwar.

RAJPIPLA
Situated in the foothills of the Satpura range, between the Narmada and Tapti rivers, Rajpipla grew to be one of the most prosperous princely states in Gujarat, second only to Baroda. But today, it is more known for its high-profile gay prince Manvendra Singh Gohil who even landed on Oprah Winfrey's couch (err! on the show).

How to get there: It is located around 100 kms from Vadodara. A drive down the state highway is the best mode of transport to this erstwhile princely state. 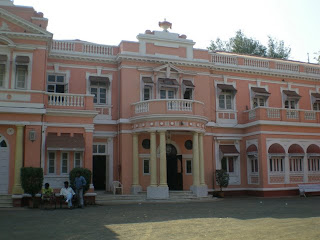 Princely state: The owners of the Rajvant Palace Resort are the descendants of The Gohil Rajput rulers of princely Rajpipla, its state area covering about 1,800 sq miles, mostly of forest, agricultural land and river valleys. The builder of modern and affluent Rajpipla was his son, Vijay Sinhji, who came to the throne in 1915 AD, and proved to be a great administrator. He was conferred the Knight commander rank, the hereditary title of Maharajah and the gun salutes for the ruler of Rajpipla were increased from 11 to 13. He introduced free Primary education, nominal high school fees, scholarships, a hospital, five dispensaries and a veterinary hospital in the state, good public works, a criminal-and-civil court, good motorable roads, a 40 mile railway line connecting Rajpipla to Ankleshwar, a junction on the Delhi-Ahmedabad-Bombay line.

Tourist spots: Undoubtedly the Rajvant Palace Resort. The pink palace resembles a European mansion, with it's Romanesque dome, classical columns, Greek capitals, timber truss roof, Venetian doors, Gothic arches, palm groves and river facing location. Don't expect too much in terms of architecture and you will not be disappointed. The palace also has two museums - a palace museum and an adivasi museum. For just Rs 15, you can take a tour of the museums and see the royal relics and tribal artefacts. While the royal family still lives in one wing of the palace, the rest of it is rented out 10 months a year for film shoots and serials. A 100-odd low-budget Bhojpuri and Gujarati films have been shot at this palace.
Besides the palace, Rajpipla has many old buildings including the majestic Vadia Palace.
There are three waterfalls in the area — Jerwani, Junaghata and Ninai — and the two river systems of Narmada and Karjan besides two wildlife sanctuaries. The controversial Sardar Sarovar project or the Narmada dam is just 35 km from Rajpipla.

The story has been published on Mumbai Mirror.

Posted by Innate Explorer at 12:31 PM

interesting travel piece. i should check some of the places out as well

Hi, I came to your blog while searching "Dabhoi fort". Well written with nice pics.
(i liked your cheery profile as well, breezily written - esp the bit about making a rock talk!)

A question - were you convinced that is this a fort, built for military purposes in 10th century? Seems quite ornate, more like a temple - at least of civilian use- to me.
also, Can you give me the reference where you found the name Darbhavati?

Hi Bigtoe,
There are four gates in the town, one in each cardinal direction: Hira Bhagol, the most exquisitely carved gate, is in the east, with Vadodara Gate in the west, Champaner Gate in the north and Nandod Gate in the south. The picture that you see here, is that of the Hira Bhagol. Bhagol, in Gujarati, refers to gate. In Gujarat, most towns, cities and villages have gates, many of which are ornate. A rare example of Hindu military architecture in Gujarat (since most of state came under Sultanate rule in the 1300s), the Dabhoi Fort is believed to have been built as per Vaastu scriptures.
As for your second question:
Dharbavati crops up in various references: