In the world of Pinki's smiles 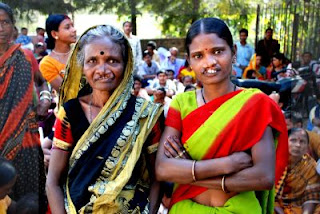 The Oscar winning documentary, Smile Pinki, highlighted the plight of children with cleft lip who find themselves without friends because of the way they look. Here’s how some people are trying to bring a smile back on the faces of these children
Eisha Sarkar
Another Pinki smiles. But not just at how her future has changed but her 50-year-old mother Khelodevi's too. Both Pinki, 20, and her mother had the cleft palate syndrome. When Pinki came in for treatment at the Tata Main Hospital, Jamshedpur, her mother didn't want to 'ruin her chances of getting free treatment by going to the table first'. But plastic surgeons from NGO Operation Smile were adamant that both mother and daughter should be treated together and now both are awaiting their follow-up medical checks on March 7.
Many smiles
When international NGO Operation Smile comprising 42 health volunteers, paramedics and doctors set foot in Jamshedpur, they'd expected to treat around 150 patients from the rural districts of Jharkhand and Bengal over a period of five days. “It comes as a surprise that we've conducted surgeries on 181 patients in just five days - 36 cases a day,” says Mumbai-based Rohan Das, who is the regional coordinator of Operation Smile India.
If it weren't for the Oscar for the documentary Smile Pinki (tale of a girl who has been left out from the social circle because of her cleft and how her life changes for the good after undergoing a lip surgery sponsored by NGO Smile Train), hare-lipped children in remote villages in India's heartland, would never have seen a surgeon, let alone the insides of an operation theatre.
What is cleft palate syndrome?
Cleft lip (cheiloschisis) and cleft palate (palatoschisis), which can also occur together as cleft lip and palate are variations of a type of clefting congenital deformity caused by abnormal facial development during gestation. This type of deformity is sometimes referred to as a cleft. A cleft is a sub-division in the body's natural structure, regularly formed before birth. A cleft lip or palate can be successfully treated with surgery soon after birth.
What are the problems associated with cleft palate?
Feeding Problems
1. Cannot suck effectively
2. Milk gets into the nasal cavity and may result in choking or aspiration

Teething Problems
1. Missing teeth
2. Increased number of cavities
3. Malocclusion of teeth - When teeth are bunched together or on top of each other.

Speech Problems
1. Nasal voice
2. May develop nodules on the vocal cord due to vocal abuse
3. Delayed speech and language development
4. Difficulty with articulation and proper pronunciation of words

Ear Infections
1. Most children with cleft palate are prone to middle ear infection
2. Hearing Loss
3. May be associated with repeated ear infection

Ray of hope
Sukhlal, who had come to Jamshedpur from Dhanbad to get his sister treated, says, “The Tata Steel Rural Development Society told me about the dates of this surgery. My 11-year-old-sister Neerkumar had a cleft palate and split lip. We would not have been able to afford this surgery. These doctors are very good. They even gave us place to stay during the course of my sister's operation.”

From remote villages people make a beeline to the hospital in Jamshedpur for free treatment. They lodge in the hospital's premises till their near-and-dear ones are discharged.

“We've had camps like these in Rajkot, Guwahati and Kolkata and we've seen tremendous response from people, but none like this one. With every successful reconstructive surgery we feel more humbled and till now, we've not had any complaints from our patients worldwide,” says Brandon P Ringler, programme coordinator, Operation Smile.

Miami-based plastic surgeon Dr R Gottenger says, “Most of these people would never know that they could get clefted palates treated. You find 35,000 such cases every year. At every camp, we first screen the kids above the age of six months for deformities and then prioritise their surgeries - those wide split lips are given first preference because if they can't close their mouth, they can't swallow food. Adults with cleft defects are also included.”

“The surgery takes not more than a few hours and patients recover in a day's time. They are provided counselling at the camp. They can start talking after 72 hours and have to be administered a liquid diet till the lips are sealed,” says Dr P C Mahapatra, paediatrician, peripheral health services, Tata Steel. Dr Mahapatra says the company's rural development service wing has been conducting such programmes since 2002, in collaboration with NGO Smile Train.

Genes, poor nutrition to blame
Drugs, exposure to pesticides, alcohol, and vitamin A are often listed as environmental factors that can give rise to cleft palates. However, Dr Gottenger explains, “There's no specific cause for this deformity. It happens in the foetal stages of development. It may be genetic to a certain extent though some studies show that malnutrition, especially a deficiency of folic acid in the mother's diet, may also have something to do with it. Nearly 48% of the cases I've seen in Third World countries have been from the Muslim community, where you see a lot of inbreeding and a smaller gene pool."

More cases in the east
Mumbai-based Mandar More, a volunteer with Operation Smile's documentation centre notes, “We see more cases in eastern India, Gujarat and Vijaywada than in Maharashtra. This could probably be because of certain nutritional factors in these regions, apart from genes.”

(Operation Smile's next camp will be held near Kolkata starting from March 14).