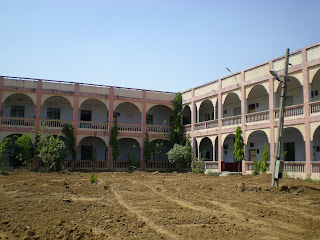 Not many people go to Kalol for touristy purpose. This small town in the Panchmahal district of Gujarat has nothing to offer - no heritage buildings, cultural centres or natural resources. This is typical small-town Gujarat where most people in the 15-25 years age-group aspire to get a job in big cities - Ahmedabad, Vadodara and even Mumbai or at one of the MNC manufacturing units present in this SEZ.

A few eyebrows were raised when I put forth the idea of visiting Kalol, which is about 50 km away from Baroda. "But there's nothing to see there. You'll be disappointed," was what I was told. My detractors were right. Kalol offered nothing to see. But it offered an opportunity to learn. Having spent a better part of my life in a megapolis the size of Mumbai, it did come as a surprise to me that this town has a population of only 25,000. Downtown Plus, (now known as the Times of South Mumbai) has a circulation of 1.1 lakh - and that's just south Mumbai.

Through relatives, I managed to get a contact - Professor Kishore Vyas, who is the principal of the M M Gandhi Arts and Commerce College at Kalol. Finding the college wasn't tough - there are only two big colleges in the city.

The principal was busy with guests at a college function. I had to wait. Sitting in the so-called office I looked at the name-boards displayed. The head clerk was a Shah, the man next to him was another Shah. The supervisor was a Shah too and so was the 'receptionist'. Before I could enquire, I was asked to come in. I wasn't too sure how to start. I just wanted to explore Kalol, but that wasn't reason enough to meet the principal and two of the trustees of the college. I mooted the idea of a documentary on the Panchmahal district.

They weren't really interested. Only when I started taking down notes, did one of the trustees start talking. "You can't call Panchmahal a backward district any more. We were backward till about seven years ago. Colleges in the backward districts get state grants of Rs 12 lakh while we are now getting only Rs 2.50 lakh," said J S Patel, secretary of the college. It was lunch time and the authorities were in no mood to talk. They asked me to come back after some time.

I dodged curious glances from some of the male students as I waited in the corridor. Soon, I was ushered into another room. That's where I met I Macwan, the head of the English department of the college. There were no formal introductions here. Macwan straight away got down to business. He asked me what had brought me there. I mumbled something about wanting to know what kind of courses were popular with students in semi-urban areas. "Sanskrit." "What?" "Yes, most students who take up arts, take Sanskrit. Most villagers wouldn't want to send their daughters to college to study commerce or sociology. But Sanskrit, because it is the language of the Vedas, makes education 'respectable'. At least that helps our cause in getting girls educated. Besides, they can take up teaching jobs after doing BEd in the subject."

That the dying language would find takers in a small-town college came as a surprise to me. But when the literacy rate among women in the surrounding villages is just about 50 per cent, the choice of subject doesn't matter, just the fact that they are now able to study at a college does.
Posted by Innate Explorer at 12:16 PM

The subject matter of this post maynot be very interesting but your keen observations have given this otherwise black and white piece some life and colour. Looking forward to more such quirky posts...Keep up the good work!